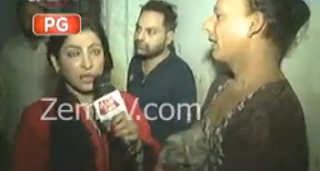 Queer Pakistan is reporting that a national TV show called "The Secret" invaded a Lahore couples home humiliates them, lies about them and then hands them to police. The couple could face 2 years to 10 years imprisonment (gross indecency between persons of the same sex), and up to Life imprisonment (Buggery)


Male & She Male living as Husband Wife in Pakistan by zemvideos
The text that accompany the annoyingly repetitive bull eyes:

1) “Unemployment has led even men to prostitution”… huh?
2) “People [ignorantly] love those who are worthy of stoning”…
3) “Showbiz industry is full of homosexuals (Ansar Burney)”… quotes Pakistani human rights activist Ansar Burney.
4) “What’s the purpose of men dressed as women to stand on roadside”… maybe to hire a taxi?
5) “Men trapped in prostitution in rented houses”… huh?
6) “Business of homosexuality in Zamzama, Clifton and other posh areas…”… and we thought homosexuality was a sexual orientation.
7) “Decent and respectable people also involved in this crime”
8) “Tiny places/cabins/huts are house of sins”
9) “Need of lawmaking to curb homosexuality…” Really? You need more legislation in a country that criminalizes homosexuality and has Sharia clauses that prescribes capital punishment?
9) “This nation is destroyed because of open-minded people…” genius! We thought poverty and terrorism was the cause but now we know, it’s open minded people!
10) “Man the bridegroom and man the bride…” honey you really need to get used to seeing that now that several countries recognize that.
11) “Government silent spectator…” of course, what’s the harm in blaming government, everyone seems to be doing it.
12) “Glimpse of People of (prophet)Lot even in this modern world” … honey modern world has more ‘people of Lot’ than the people of Lot themselves. Your ignorance is at fault here.
13) “A big cause of HIV and AIDS is homosexuality”… okay, that’s crossing the lines of ignorance. Missy, the cause you are referring to is “unsafe sex” which also prevails in heterosexuality. Honestly, don’t you do any research and have any editorial control these days?
14) “Vulgar men acting as eunuchs…”