Two and a Half Men: Alan falls for a Transgender Woman who used to be Paul 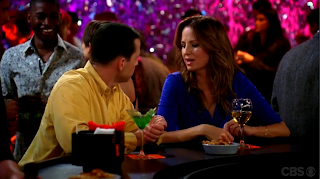 Synapse: Alan accompanies his niece Jenny who just came out to a gay bar where he unexpectedly meets Paula, who reveals she's a banker. After drinks they find themselves turned on and have a sexually charged conversation about banking and well, early withdrawals.
So far so good. Pretty much like lots of hook ups that most of have experienced?

But with talk like the outcome is inevitable. The next scene finds the two in bed after sex with Alan looking ever so satisfied, but inexplicably Paula has a perplexed look on her face. 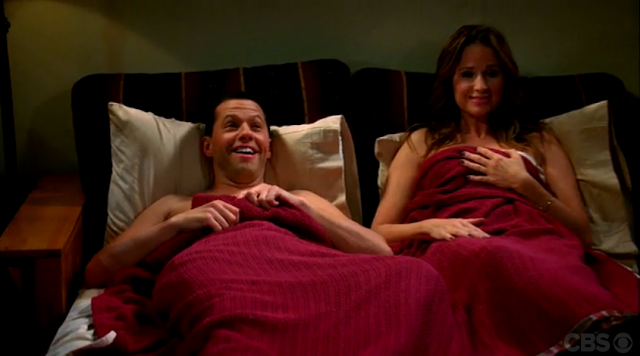 Paula explains her trepidations "well there was something that I should have told you before we slept together" What a husband or herpes? gasps Alan "Well" Paula explains "there was another guy, Paul. You see for the first forty years of my life I was a man named Paul."

...the perfect set up for transpanic outrage...... 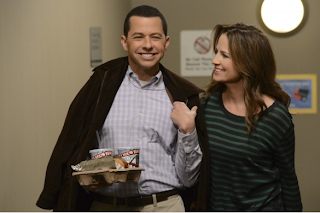 According to reviews Alan is enamoured with Paula and her being trans isn't a factor in upcoming episodes. Of course we know they'll be treading the fine line between trans sesitivites and comedy.

cartermatt.com "Jenny decides to take Alan to a gay club to pick up women and he meets a woman named Paula that he clicks with. He brings her home and after sleeping together, Paula tells Alan that she used to be a man named Paul. We initially thought that Alan might be weird about the situation, but they have such a great connection that he decides to keep dating her. Paula quickly shows that she’s the alpha in the relationship, but Alan really doesn’t seem to have much problem with it."

Yes I know, another cis woman playing a trans person. WHY? And I know some trans peeps will say its up to us when or even if we divulge or trans history but this is a TV show and hopefully they will keep the show classy and forward looking.