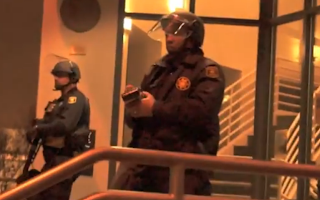 In February KPFA News reported on Black transgendered Berkeley resident Kayla Moore's death in Berkeley Police custody, after a violent struggle with police at her apartment on Allston Way on February 12th. Earlier this week Berkeley Copwatch, which has been conducting a citizen investigation of Moore's death, contacted KPFA to say that the coroner's autopsy report on the cause of Moore's death will be withheld indefinitely at the request of the Berkeley Police Department.

Listen to the interview here.

On February 12th, 2013 Officers from the Berkeley Police Department killed a transperson named Kayla Moore. In the days to follow, BPD would remain silent on how somebody could just die in their custody.

As the weeks passed, Berkeley Copwatch was able to get some information from the coroner, and on February 28th they held a press conference to call for an investigation into Kayla's suspicious death.

Berkeley Police would still not come forward with any information.
On March 12, one month after the killing, a autonomous protest would be held in Berkeley by concerned people from around the bay.
Instead of bringing answers, Berkeley Police brought undercover units, who would fan out into the march attempting to identify "leaders" of a leaderless march. The march started in People's Park, would go to the police station, and end back by the park without incident.

If Berkeley Police put as much time, money, and energy into the investigation of Kayla Moore's death, as they did on this particular march, the "investigation" would have been done weeks ago.