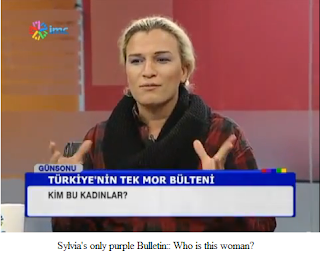 Demishevich's life is one many transgender woman can identify with in some way. She acknowledges knowing and willingly giving up cisgender male privilege to live her life authentically. One filled with anguish but incredible rewards.

Michelle's first interview did not begin ostentatiously when her request for information was rewarded with: "Are you kidding me? Can a transvestite be a journalist?"

"Bianet" a Turkish English language news source interviews Ms. Demishevich and asks her "It's been a month so far. How is it going?"

"It was challenging actually. Because you are the other and they always make you feel like that. But you have to be strong. For example, we have common space for eating and smoking. The very first days people were poking each other and pointing me out. Women would go past me and laugh, I had no clue. In my opinion, women should have understood me better. Every time I was going through security, guards were causing issues even though they knew where I was working. The very first 15-20 days, I used to cry every time I got back home. But I made up my mind, I wouldn't give up. Security guards can call my boss every single morning. I love my work environment. I am just like everyone now. My gender identity is out of the question now. I love my job. At first, people were so surprised to see me write scripts and make announcements. I can say that people were astonished to see me as journalist. This is so important for me. I don't want to lose my job due to little mistakes. I get up at 6:30am every morning to go to work."

What kind of feedback do you receive from people?

I first reported from Sirkeci Police Headquarters. Officers were informing other journalists but ignoring me. I asked one of them why he was not responding my questions. I said I was a journalist, too. "Are you kidding me? Can a transvestite be a journalist?" he said. "You could be a cop, I can be journalist too," I said. They were handing out bulletins. They passed one to me as well, probably thinking that I was a lunatic or something. Other journalists ignore me, too. I greet them but they never greet back. There are a handful of journalists who don't hold a distance. I guess the rest will get used to it.

If I face discrimination at work, I cry all night and get back to work the next morning. I don't care, I suffered enough for my identity already. I came to this point by struggling. Nothing can bring me down. I learned how to stop fearing.

Please read the whole interview on Bianet Turkey's First Trans TV Reporter Reveals Her Story. So often Turkish news sources revictimize our family after they are murdered in Turkey. Perhaps this will be a new beginning.