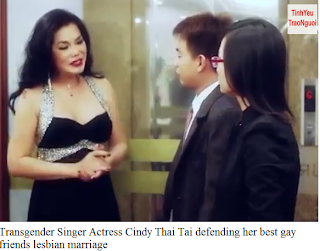 The you tube viral sensation "My Best Gay Friends" has taken Vietnam and the rest of the world by suprise quickly accumulating over 8 million views from April 2012 to April 2013. The series, a light hearted look at LGBT young peoples adventures and misadventures comes on the heels of a suprise announcement by the the country's authoritarian goverment last year announcing they were considering legalizing same sex marriages.


"The couple is female! This wedding goes against Vietnamese traditions and customs," the manager of a restaurant says as she forces the wedding party to leave the establishment. "They are violating the law."

Cindy Thai Tai protests, asking "so you think that the homosexuals have no rights to love and wed each other lawfully?" the manager quickly explains the establishment has no choice.

"Please madam, local authorities called us and forced us to cancel this wedding. If we go against the order we'll get a serious fine!" the manager adds.

The wedding is quickly moved to an alternative venue and goes ahead -- to the delight of the couple's friends and family present. mb.com

There are no subtitles, but they are not needed. love is universal and these emotions come through loud and clear.