Proof It was a Trans not Gay Skeleton Found In Prague 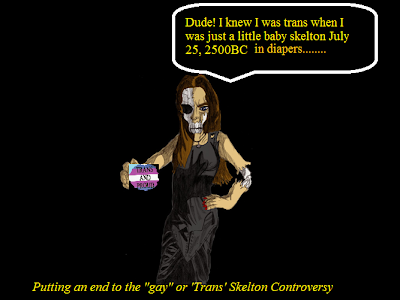 Those gay assimilates want our bones.

Seems a skeleton was found in Prague. What made this skeleton special was she was facing east, was surrounded by jugs and was pre op! Next thing I'm reading is how the skeleton might be the oldest known gay bones. So I got a exclusive interview with her Gurrl, the the transgender Prague Skeleton.

Gurrl explained how it was back in the Corded Ware culture of the Copper Age thousands of years and religions ago. "Yeah so we GNB (Gender Non Conforming Bones) had it pretty good back then...except some of the right wingers bones got all bent when we'd do our 'business" Gurrl elaborated, "..so there were boulders chiseled woman and and some chiseled "men". Naturally us female trans skeletons would go with the cis woman skeletons. It was cool for years but then out of the blue this one freakazoid skeleton named Kavanagh introduced "NoRock4U" sticks. It was all messed up"

So there you have it. Somethings haven't changed. But we're working on it.