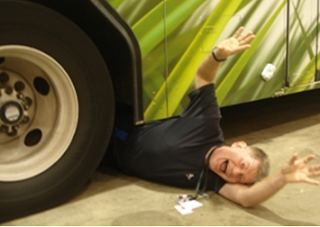 26 April 2013:
Bradley Manning will not be a grand marshal in this year's San Francisco Pride celebration. His nomination was a mistake and should never have been allowed to happen. A staff person at SF Pride, acting under his own initiative, prematurely contacted Bradley Manning based on internal conversations within the SF Pride organization. That was an error and that person has been disciplined. He does not now, nor did he at that time, speak for SF Pride.

Bradley Manning is facing the military justice system of this country. We all await the decision of that system. However, until that time, even the hint of support for actions which placed in harms way the lives of our men and women in uniform -- and countless others, military and civilian alike -- will not be tolerated by the leadership of San Francisco Pride. It is, and would be, an insult to every one, gay and straight, who has ever served in the military of this country. There are many, gay and straight, military and non-military, who believe Bradley Manning to be innocent. There are many who feel differently. Under the US Constitution, they have a first amendment right to show up, participate and voice their opinions at Pride this year.

Specifically, what these events have revealed is a system whereby a less-than-handful of people may decide who represents the LGBT community's highest aspirations as grand marshals for SF Pride. This is a systemic failure that now has become apparent and will be rectified. In point of fact, less than 15 people actually cast votes for Bradley Manning. These 15 people are part of what is called the SF Pride Electoral College, comprised of former SF Pride Grand Marshals. However, as an organization with a responsibility to serve the broader community, SF Pride repudiates this vote. The Board of Directors for SF Pride never voted to support this nomination. Bradley Manning will have his day in court, but will not serve as an official participant in the SF Pride Parade.

Reading the comments SF pride is paying the price. Discipline me baby.


The insult is how fast you caved to corporate concerns. I am not the only vet who has seen Prides go from a unabashed celebration of gayness by gay men to a outright red white and blue fight for cisgender corporate money. (not that thats a loss to trans people, just saying). The Prides have become nothing more than a big advertisement. So who are they inviting to assimilate the gay mans culture?

From the guardian's Glenn Greenwald "First, while even a hint of support for Manning will not be tolerated, there is a long roster of large corporations serving as the event's sponsors who are welcomed with open arms. The list is here. It includes AT&T and Verizon, the telecom giants that enabled the illegal warrantless eavesdropping on US citizens by the Bush administration and its NSA, only to get retroactively immunized from Congress and thus shielded from all criminal and civil liability (including a lawsuit brought in San Francisco against those corporations by their customers who were illegally spied on). Last month, AT&T was fined by OSHA for failing to protect one of its employees who was attacked, was found by the FCC last year to have overcharged customers by secretly switching them to plans they didn't want, and is now being sued by the US government for "allegedly bill[ing] the government improperly for services designed for the deaf and hard-of-hearing who place calls by typing messages over the web."