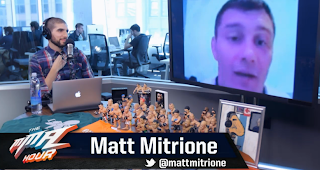 Two days after his 19-second knockout win over Philip De Fries, UFC heavyweight Matt Mitrione has had his contract suspended by the promotion for calling Fallon Fox a "lying, sick, sociopath, disgusting freak.". according to USA Today.

This is making headlines everywhere but in the world of MMA cage fighting calling someone a freak happens everyday, so what really got Mitrione suspended?

So I transcribed (roughly) The MMA Hour interview Matt Mitrione which starts about the 18 miniute point.

Mitrione: In the heat of a moment you can have a full rational thought. When I was starting my ground pounding against Phil I though about my options and immediately thought since he (Fallon Fox) is a Lioyd Irvin student maybe he doesn't know how to defend against a rape joke. He definitely knows how to apply a rape joke but he doesn't know hoe to defend it"

Ariel Helwani : All of a sudden you win a fight and you get your swag back thats nice to see.

Mitrione: My favorite joke is the last one, this is where it gets kinda gruesome..."

"It's amazing how life imitates art. The lead antagonist Buffalo Bill is a woman beater that pretends to be a woman well maybe instead of being the queen of swords Fallon Fox should consider being the king of the buffaloes."

"I have not seen a man beat a woman like that since Chris Brown beat Rihanna. That is just exceptional how he (Fallon Fox) beatss unknowing woman like that. Anyways my last joke since he's obviously intent on braking all the rules on fighting, if he ever fights again which I hope he doesn't if he loses to a woman will he charge that woman with a hate crime since that woman opposes on his freedom as a tranny?

Ariel Helwani : Why do you hate Fallon Fox so much and why do you keep callin a 'she' a 'he'?

Then looks directly into the camera no longer reading from a card explains:

"Because he's not a she. He had a gender change not a sex change he's still a man for 31 years, 31 years, thats a couple years younger than I am, he was a man and 6 years of taking performance dehancing drugs you think it's going to change all that? Thanks ridiculous. That's a lying sick sociopathic disgusting freak! And I man that because you lied on your license to beat up woman. That' disgusting you should be embarrassed of yourself...the Florida licence deal that's an embarrassment to us we should all protest that. The woman thats fighting him props to you I hope you beat his ass and I hope he gets black balled and never fights again."

The possible penalties Mitrione might face may include a finical penalty which would be a huge hit on his finances now he finally won a bout.

But the last thing Mitrione would want would be the penalty UFC Executive Vice President and General Counsel Lawrence Epstein detailed when akec about the new code of conduct in February:

“For example, if you make a discriminatory comment about a certain community, you would be required to provide some community service to that community,” Epstein said. “In our view that’s going to turn into a benefit. It’s easy to criticize people you don’t know, but once you get to know somebody, once you get to experience what they’re all about it sort of changes you as a person in a way that money or fines could never do.”

I think that would be a fine idea.

UFC 159 is set for the Prudential Center in Newark, New Jersey. The card will be headlined by a matchup of The Ultimate Fighter 17 coaches, UFC light heavyweight champion Jon Jones and Chael Sonnen. The card will take place April 27.
UFC 159