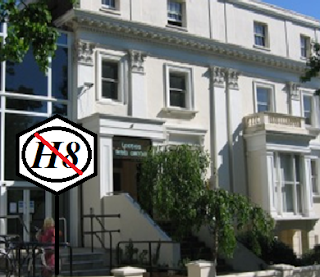 Source: The Sunday Times preview: 'THE London Irish Centre, run by a charity funded by the Irish government, has withdrawn permission for a group of feminists to hire out its conference venue in Camden, north London. The move follows complaints that some speakers advocate violence against men and are “transphobic”.'

'The RadFem conference was to have been held in June at the 57-year-old centre, the oldest and largest Irish organisation outside Ireland. Last year RadFem’s plans for a conference at Conway Hall, a convention centre in central London, had been vetoed after it was discovered that the group intended to deny entry to transgender women by restricting tickets to “women born as women and living as women”.'

'The London Irish Centre provides welfare services for Irish emigrants in the British capital and hosts Irish exhibitions and performances..'

You can view the article in it's entirety here. While it's great to see a mainstream media article published about this it's slightly misleading as to the actual reason for the venue cancellation.

TERF (Trans-Exclusive Radical Feminist) AKA incorrectly as Radfems posted this INTERIM LEGAL STATEMENT BY RADFEM2013 ORGANISERS in response to the venue's cancellation.

TERF Cathy Brennan an attorny for Hudson Cook from Baltimore MD posted this comment in response to the host services, "Off to Work" Facebook statement explaining why they felt it best to cancel the conference

It should be noted by venues across the UK should they allow the TERF's to reserve their property for future gatherings they might very well become victims of vindictive legal entanglements initiated by the TERF's should they reconsider and not allow them to use their spaces.

THE London Irish Centre denied TERF the use of there property because they "..did some research into RadFem and discovered certain language was used and some statements were made about transgender people that would go against our equalities and diversity policy.”

It's very possible the Centre was referring to TERF Julie Burchill's post on the Guardian which has since been redacted and subsequently categorized as hate speech by the police.

The London Irish Centre didn't deny the property because of MRA actions as the radfems would have people believe. Uncommon Sense and Another Angry Woman have the lowdown on what really happened.

TERF Groundhog Day. Kicked Out Of London. Again. They were denied Conway hall last year for the same reason. Let's see, that makes two years in a row. But who's counting?

TERF's really ought to cease the hate then they wouldn't have so much difficulty finding a place to hold their yearly convent in London. This makes two years in a row your hate speech has gotten you barred from a London venue.

There's another point that needs top be clarified. The vast majority of cisgender Feminist do not hate or exclude trans people as pointed out in a comment made on this post by Lesbians and Feminists Against Transphobia:

"Although I want to acknowledge that not all radfems are TERFs, I'm very happy to see TERFs being marginalised for their hate, they definitely do not speak for feminism, their views are deeply anti-feminist and thoroughly disturbed. Feminism is intersectional or it isn't really feminism at all."

I deeply appreciate that clarification especially since its coming from cisgender feminists and have since edited this post to properly identify TERF's.

Bugsbrenan et al. In case you don't know what it is that keeps getting doors slammed in your mug here it is "...hate speech is any speech, gesture or conduct, writing, or display which is forbidden because it may incite violence or prejudicial action against or by a protected individual or group, or because it disparages or intimidates a protected individual or group."

Have a nice day.

Email ThisBlogThis!Share to TwitterShare to FacebookShare to Pinterest
Labels: radfem 2013