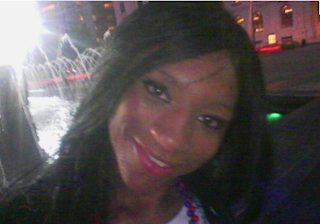 The Plain Dealer Doubles Down On Transphobia.

Plain Dealer reporter John Caniglia wrote three articles about the murder of a transgender woman in Ohio. The first Concrete block on body found in Olmsted pond was not entirely offensive, ignorant and crude, but factual.

Update 4/30: The plain Dealer under intense criticism from the trans community and allies has changed the title of the second and third articles and edited a paragraph calling her body a 'it'.

The PD posted this on the bottom of the last article. "This story has been edited since originally posted to bring it within the style recommended by the Associated Press involving transgender people."

Caniglia didn't bother to include police contact information in his next articles. His editor probably didn't care if he did only encouraging him to step up his transphobia after noticing the attention the first article was receiving.

The second article published 1:11pm on the 29th"Body of oddly dressed man found in Olmsted Township pond identified" reflects Caniglia's hatred of transgender people as he intentionally misgenders the woman recounting with a vengeance her self defense and use of HRT.

The third article published later at April 29, 2013 at 8:15 PM, "Brutal slaying marks the end of Cleveland man's fight for acceptance." was nothing less than a all out assault on transsexuality.

John Caniglia ha absolutely no respect for the dead or any clue as to who we are. I invite everyone to comment on his articles.

This scan of the print version of the article can be better viewed here. 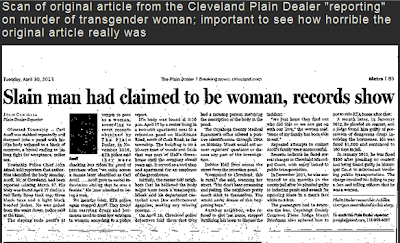 Gay Star News also has a article about her murder.