Video: Bindiya Rana A Politican for Khwaja Sarras and all Pakistan 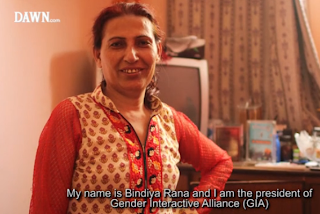 Empowered like a waterfall of hope Bindiya Rana's qualities gather in a pool of strength flowing from her community. Bindiya Rana President of the Sindh chapter of the Gender Interactive Alliance (Gia) is one of the best politicians the global trans family has to offer.

Pakistan's transgender people are just coming of age, having recently acquired some equality but they have a difficult row to hoe in this conservative patriarchal country.

Bindiya Rana told Heba Islam at Dawn.com why she's running. “I looked at what all the other parties said about transgenders (TGs) in their manifestos. They referred to women and children’s rights, but there was no mention of TGs at all,” explains Rana. This is the platform that the activist is running on – the idea that someone needs to give a voice to her community.

“They say they want a ‘naya’ (new) Pakistan’ – I don’t understand, where did the old Pakistan go? That’s the one we need to fix,” she adds, grinning.

It was in 2012 that transgenders were given the right to list themselves as a third gender on their CNICs. They were also promised much more.

Rana, while praising the chief justice, points out that much else is left to be done. “We were promised a community centre, we were promised medical benefits. These are still to come”.

Riffee Khan, an AIDS health worker by profession, who is also the treasurer of Gia and holds two MA degrees, chimes in and says that people often ask why members of the Khawaja Sarra community resort to begging on the streets. “There’s only so much we can do,” she explains. “We are nothing in front of the government. If the government provides a vocational training centre for members of our community, then our people wouldn’t have to beg or indulge in other questionable activities.” Read more at Transgenders: The nes voter group in town.