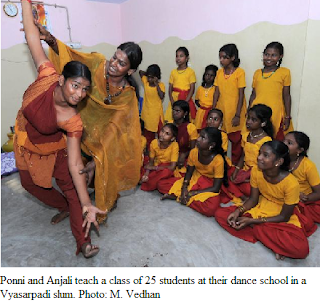 Ponni, a transgender woman from Chennai, India had a dream 20 year ago as a youth. She longed to dance, but because of her gender expression Ponni was denied the classes she needed to hone her skills. She was forced to watch dancers, secretly, alone from outside peering threw a window.

Ponni's life long dream is being realized and much to her amazement, with the support of her students parents. Ponni's story is an inspiration to all of us as she crosses bridges, creating friendship with respect, hard work and unselfish dedication while dancing to her own music.

CHENNAI: The clanging of the 'nattuvangam' resonates with the synchronised thumping of more than a dozen pairs of feet. Dressed in purple and blue, the children elbow one another in the cramped room, but they snap to attention when their guru dances to the invocatory song.

The room is small and in a ramshackle tenement, but the clutter does not hamper the passion with which Ponni, a transgender, leads her students. "I want to be as graceful as her," says 12-year-old R Supriya, trying to perfect her mudras in front of the mirrors that line one side of the class.

Located in a slum in Vyasarpadi on the outskirts of Chennai, Abhinaya Nrithyalaya is the outcome of Ponni's 20-year dream. "I've wanted to set up a dance school for slum children since my childhood in Tuticorin when I was rejected by a dance class because it was open only to Brahmin students. I used to secretly stand by the window and watch them dance," recalls Ponni, who underwent a sex reassignment surgery in her 20s.

Read more at Times of India

Photo The Hindu "Carving an identity with dance
"

I am fully agree with your given article information.Thank you for sharing this blog.I like it.
Dance Academy in Panchkula