Is it a Trans Inclusive ENDA to Be Introduced Thursday? 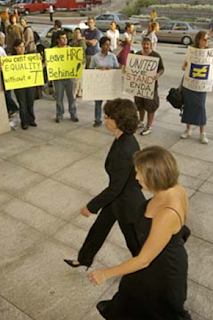 We won't know until Thursday but I'm apprehensive about the optimism being expressed by Rep. Jared Polis. LGB people would have a lot easier time without us passing ENDA and that would warrant a lot of optimism. Will this time around threaten the very fabric of LGBT unity again? I'm skeptical, prove me wrong. Please.

The nitty gritty. The Senate may move it onto the floor for a vote but it is more than likely doomed in the House.

Tammy Baldwin told Metro Weekly "I have to say, given the current leadership composition of the House, I don't think it goes anywhere," Baldwin recently told Metro Weekly. While the House did pass an LGBT-inclusive Violence Against Women Act in February, Baldwin says she fears that may be an exception to the rule, "which is if they don't have a majority of the majority caucus supporting something they're not going to let it to the floor. And I don't see that changing in the near future."

There's only two things for certain. We can only speculate about the wording and there will be a lot of speculation.