UFC Bantamweight Champion Ronda Rousey On Fallon Fox "You can Cut Your Pecker Off..but its still not fair." 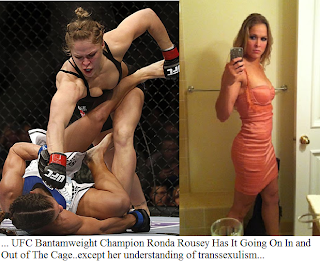 Rousey told The NY Post she’s "researched the topic extensively and has come to an informed opinion"..(about transsexualism).

Rousey says if Fallon Fox should get into a position to fight her she would but only if the UFC wanted her to because “she can try hormones, chop her pecker off, but it’s still the same bone structure a man has,” Rousey told The Post. “It’s an advantage. I don’t think it’s fair.”

Rousey told the USA Today she has competed in judo against hermaphroditic athletes, she had no qualms about it because "that was something they didn't choose." Fox, on the other hand, is a different case.

"It's not something that happened to her," Rousey said. "It was a decision she made. She should be aware in her career after that, it's going to be an arduous path. I don't know why she's surprised by that. It's going to draw a lot of emotions."

For the record no one has ever made a 'choice' to be transgender. Transitioning and the following procedures are not optional to the ones who undertake them. True, not everyone needs all of the operations, hormones or therapy. What a persons needs depends on that person's innate gender expression.

And what if Fallon Fox should over come all odds and become the next Bantamweight UFC Champion? Rousey's transphobia becomes apparent as said that would be "...a very socially difficult situation.”

Note to the NY Post and USA Today: Journalist ethics compel us to link to our articles once we have published homophobic, transphobic or racial defamation verbatim. Publishing them over and over only amplifies the pain to the offended party, re-victimizing Fallon Fox.