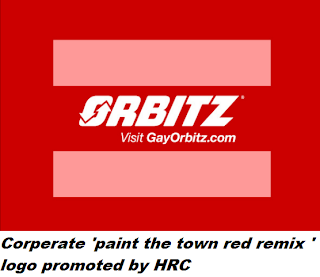 HRC is slipping into a quicksand pit of duplicity and once again it's trans and queer people who are suffering.

On March 27th HRC staff members accosted C.d. Kirven and Brian who were waving a Bi flag and a trans flag respectfully, while attending the marriage equality rally at the Supreme court.

The HRC staff members were most upset by the trans flag focused in on Brian, terrorizing him to tears to the point he dropped our flag and ran off crying. C.d., a cisgender ally, jumped in at that time picked up our trans flag and stood her ground proudly waving our flag for us.

The latest on April 1, 2013 by Fred Sainz, Vice President, Communications and Marketing.

"In the midst of a tremendously historic week for our community, two unfortunate incidents at the United for Marriage event at the Supreme Court last week have caused pain in the community. In one case, a trans activist was asked to remove the trans pride flag from behind the podium, and in another, a queer undocumented speaker was asked to remove reference to his immigration status in his remarks."

"HRC joined in a coalition statement on Friday apologizing for these incidents and the individuals involved have personally offered their apologies to those affected. But to be perfectly clear, HRC regrets the incidents and offers our apologies to those who were hurt by our actions. We failed to live up to the high standard to which we hold ourselves accountable and we will strive to do better in the future. Through both our legislative and programmatic work, HRC remains committed to making transgender equality a reality."

In a previous press release on March 28th HRC Communications director Michael Cole-Schwartz issued this statement to Qnotes denying any wrong doing in response to the growing ground swell of condemnation.


“It was agreed that featuring American flags at our program was the best way to illustrate this unifying issue which is why when managing the area behind the podium, several people were asked to move who were carrying organizational banners, pride flags or any other flag that was not an American flag,” the statement read. “Several people refused and they were allowed to stay. The coalition welcomed the variety of signs and flags that were throughout the plaza that demonstrated the wonderful diversity of our community.”

HRC added, “It is a not true to suggest that any person or organization was told their flag was less important than another — this did not occur and no HRC staff member would ever tolerate such behavior. To be clear, it is the position of the Human Rights Campaign that marriage is an issue that affects everyone in the LGBT community.”

I just contacted C.d. Kirven. I asked her if anyone had contacted her or Brian and offered an apology. C.d. Responded "No one has contacted me. I'm unsure about Brian."

First off, HRC did NOT join in the apology made by the coalition. At that time they too busy lying saying they were innocent of all the allegations.

If it weren't for social media HRC wouldn't have said a thing about their tyrannical behaviour much less offer a 'personal apology' to thin air. They still need to contact these three people personally, Jerssay Arredondo, Brian and C.d. Kirven and present themselves as a responsible respectable organization and offer a heartfelt apology.

And please, don't don't tell me 'oh everything is fine now can we get back to winning' because the shit is broken and ignoring the problem is not going to help. The public thanks to the white washed portrayal of the marriage equality movement during the rally doesn't know undocumented trans and queer folk are the ones most affected by the upcoming supreme court marriage ruling.

And thats just how HRC wants it.

HRC needs to come to terms with the fact rich white men are not the only people in this struggle. HRC needs to put our interests, undocumented binary non conforming queer and trans people in front of corporate concerns then maybe, just maybe we can say things are getting better.

HRC shamelessly promotes and profits from the stygmization of the trans persona with Orbitz.