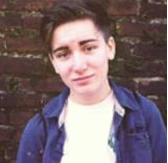 Issak Oliver Wolfe was elated he was running for homecoming king and had reason to believe he could win. He is well liked, far down the road on transition and active in school programs. But Issak arrived at the ballot box only to find his name had been removed.

Issak recalled the morning in a email: "I made flyers to hand out and when I went to vote I did see my name had been removed." When Issak asked why he was told by a vice Principal he couldn't run for Prom King because "it was based on sex not gender and he would not allow me to."

Blindsided, Issak recalls "No one warned me. I didn't speak with the new Principal, Mr Shue at first out of fear. I was told by someone with inside knowledge that it wouldn't help me at all so I didn't to save my self the intense stress. They closed voting the next day for court so I didn't get the chance to appeal."

Principal Shue is interviewed in this video by student Ben Otte upon taking the reins at Red Lion High School. Mr. Shue should follow his own advice.

Frustrated Issak appealed to social media "My family and girlfriend started a facebook support page Issak Oliver Wolfe for Red Lion Prom King because we didn't know what else we could do. I feel so cheated."

Issak talks about how this might affect his remaining school year. "I have not been treated differently so far at my school but as soon as local media has gotten statements from me I think they might. I don't think any teacher here would treat me differently. All the teachers I interact with are great people."

You can imagine how dehumanizing and devastating this would be for a young man. Heartbroken Issak asked principal Mr. Mark Shue later why the name and categories were changed. Issak was told by Mr. Shue his reasoning for not allowing him to run for prom king with his authentic name and gender was because he 'felt uncomfortable with it.'

These types of incidents open the eyes of other people. Change the thoughts and situation will be different.