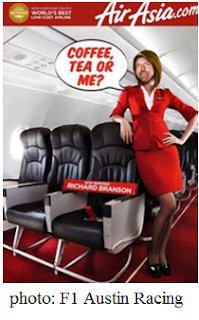 While it's not clear if Virgin Airline CEO Sir Richard Branson said 'tranny' in describing his payment for losing this bet or if Global Travel News used this defamation to sensationalize it's article t's usage in that context doubles the misogynous denigration all of womanhood. Wonder how Virgin Air stewardess and stewards feel about being the last thing their boss would ever want to be?

Branson who also owns a race car team lost a bet with AirAsia X and Lotus Racing boss Tony Fernandes over who would do best in 2010.

AirAsiaX CEO Tony Fernandes has said Branson has to comply with his company’s grooming standards and that includes shaving his legs, donning high heels, putting on some makeup, and slipping into the AirAsia’s famous red uniform. This task does not only entail serving champagne to guests but “tranny-for-a-day” Branson is expected to take on regular duties on the flight, including cleaning the toilets. "He will be committed to carry out the responsibilities of a flight attendant, including offering coffee, tea, and other food and beverages to guests on the special six-hour Perth to Kuala Lumpur flight," Fernandes was quoted as saying. ~ Global Travel News

Obviously Sir Richard Branson feels the most humiliating punishment a man could endure would to be a female for a day told the press it "will be my first, and most certainly last time as a flight attendant!".

That's kind of funny since I feel the same if I was forced into 'TRANSFORMING' in a misogynistic pig. Even if it was just for a day.
You can comment om this at the F1 Racing Facebook announcement.

One does not become a "tranny for a day". Trans is not a choice, nor is it something that can be picked up for a day. What Sir Branson is doing is dressing in drag.

I thought I was reading an article on how an airline company would have to hire a transgender stewardess, but instead I read an article about a man who "lost a bet" and must endure "the most humiliating punishment a man could endure"-- to be female for a day.

As much as I hate to defend RB, this is just bad reporting with no context to the story. Read this for the full story.