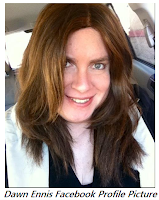 ABC News producer D. Ennis was to coworkers and friends just a very affordable and able person. The kind of person you want to share a beer with at joe's bar at the end of a day. By all outward appearances and old facebook profile pictures that what Ennis was. But much of that changed with the beginning of the new day.

As affable as Ennis was what people saw when the sun rose and a new workday began, to some extent, was a false false dawn. Ennis was keeping a secret from the world.

Dawn told the world about her coming out in a life event on facebook: 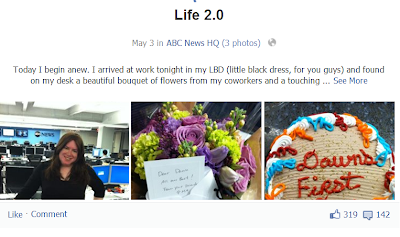 Today I begin anew. I arrived at work tonight in my LBD (little black dress, for you guys) and found on my desk a beautiful bouquet of flowers from my coworkers and a touching ...note from the president of the news division of ABC (I myself brought the cake -- and the glitter -- to thank my very accepting colleagues).

Please understand: this is not a game of dress-up, or make-believe... it is my affirmation of who I now am and what I must do to be happy, in response to a soul-crushing secret that my wife and I have been dealing with for more than seven years, mostly in secret.

I have a rare medical condition -- nothing deadly or infectious -- but it has resulted in an unusual hormonal imbalance, one so profound that I don't resemble the man you first met ten years ago. It's wrecked our marriage and changed me, both physically and in my personality; even my own way of thinking has been altered.

What I have done is to try to put together a life based on my new experience. I have spent years fighting this, trying through dozens of tests and sheer willpower to overcome what doctors cannot cure nor reverse, or even satisfactorily explain.

My beloved wife and I are separating after nearly 17 years of marriage because of this change in me; despite the heartbreak, she has encouraged me to start this new life that we both believe better fits who I now am. It's not something I've longed for or dreamed of, or discovered in my youth. It's not even something, frankly, that I wanted to do -- but I've realized, I needed to do it.

I am transgender, and identify as female. My legal name is now Dawn Stacey Ennis, and my government records now reflect that my gender is female. However, I have not had surgery of any kind, and the HRT I now take is merely to maintain a balance in what is already, mysteriously a more female than male body.

My bosses at ABC have been supportive beyond my hopes and encouraged me to be real, to be who I feel I am. Trust me, this is NOT the midlife crisis I was counting on -- I'd much prefer to have bought a sportscar. Even an affair, I think, would have been something we might have recovered from. But Wendy and I realize that with this, there is no going forward for us, and that is without doubt the saddest aspect of this change for me.

As you may know,we have three children and we are putting them first. I am moving out Saturday, to give my wife and our kids time and space to adjust to life with me on the outside. It's not what I want, but we agreed it's what she can handle. It's a small sacrifice to try to avoid ruining the end of their school year.

I know this is a lot to throw at you out of the blue, and I'm sure if you had to pick someone we know in common who might be transitioning from male to female, I'm guessing I would not even crack the top ten. But it's my reality. I hope you can understand.

I look forward to hopefully keeping you as my friend, and respect your choice to block or defriend me if that's how you feel. If you have questions, please don't hesitate to ask. Being a journalist, I've asked them all, and will share what I know.