Filed under news thats not new. Gender bender day, spirit day or whatever they called back when I was a student was a day during homecoming when football players dressed in really bad drag and spent a miserable day being gawked at. It didn't make any sense to most of us and made me feel unforgettable as well. I mean it was really pretty pitiful drag. But hey I figured what ever floats your boat. 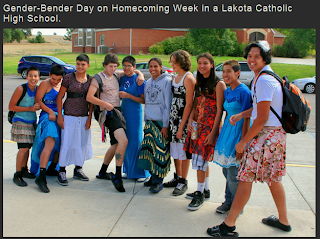 Times have sure have changed.

The Fox reporter said she didn't see 'many' kids that were cross dressed. And she knew that they were gender bending how? And they didn't show those kids, why?? It even appears the teachers were giving Fox a special show and they weren't even appreciative. Now that was a chorus line I'd do drag in!

I could offer this to those who's gender blinders sit so tight. Loosen up momma. Loosen up pops. There is no harm in gender bending for a day. It sure won't make your kids trans or gay just maybe a little more accepting.