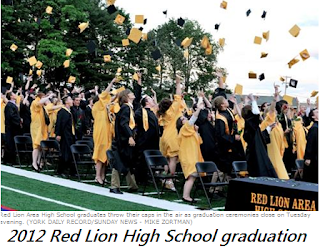 We could all but drown out Red Lion High School Principal Mr. Shue as he calls Issak by his birth name at graduation. Despite everything that was done to help him understand transgender people Mr. Shue refused to listen. Instead Mr. Shue attempted to keep Isaak from attending prom trying to bully him and his girl into silence.

Mr. Shue will be summoning him in front of all of his classmates to retrieve his diploma with the wrong name and will hand Issak a diploma, one with a females name inscribed upon it. Oh course Issak will still hear Shue call him but hopefully that won't be his lasting impression of the day. He will remember us for our support and caring.

Issak Wolfe is a senior at Red Lion Area Senior High School and will be graduating with the rest of the senior class on June 7th. Issak, who is a female to male transgender student, started his transition the summer before his Junior year and has been going by the name Issak for the past two years. Now, as graduation approaches, his school is refusing to read the name Issak Wolfe when he receives his diploma because it is not the name on his birth certificate. School administration reported that they would only read the name Issak if he got it legally changed but the process takes far longer than the one month before graduation day.

This is not the first time that Issak has run into conflicts of discrimination at his school. Earlier this year, Issak intended to run for Prom King of Red Lion High but school administration refused to put him on the list, instead telling him that he could only run for Prom Queen because they did not identify him as a male.

Despite these conflicts, Issak has been a stellar member of the Red Lion High community. He leads the Gay Straight Alliance group at school and loves taking art and ceramic classes. He also had his prom outfit (seen above) custom made for him and wants to pursue a career in business and fashion after graduation!

Please show your support for Issak by signing this card in celebration of his graduation!