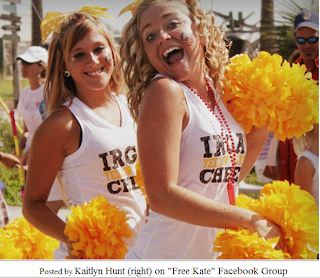 The outpouring of support from social media has astonished and almost overwhelmed Kaitlyn Hunt's family and even crashed the Change.org petition site's server for a while!

Kate's family and friends started the facebook group Free Kate because they were at he wits end and didn't know where else to turn.  Kate, a cheerleader and varsity basketball player was 17 when she became romantically involved her team mate, a freshman at Indian River High School, apparently with the knowledge of her girlfriends parents.

When Kate turned 18 her world was turned upside down. Her girlfriends parents had her arrested on felony charges for her consensual relationship with their daughter and she was subsequently expelled from her school. This was done without them contacting Kate's parents or pursuing other far less damaging legal actions, like a restraining order.

The police recorded a conversation between Kate and her girlfriend, which led to Kate's arrest. Kate was interrogated extensively without a lawyer present and was eventually charged with two counts of felony lewd and lascivious battery on a child 12-16. The prosecutor later offered a plea deal of felony child abuse, with two years house arrest followed by one year probation. If Kate turns down the plea she will be tried  by jury and could be sentenced to 7 to 15 years. In ether case she would be branded a sex offender ruining her life.

Kate has offered to permanently cease contact and leave the state if charges are dropped, but that offer has been rejected by the prosecutor and the girlfriend's parents.  Kate's girlfriend has taken no part in her prosecution and denies she is a victim, but the law grants her no rights in this matter.

Kaitlyn's mother posted this plea on Facebook: "We have until (this) Friday to either agree with an outrageous plea offer, or start trial. The state offered a plea of two years house arrest and one year probation. Kate wont be able to get a job, start her life, ever leave the house for an entire two years, then another year on probation. That is absolutely ludicrous. We need justice in this situation, not to feed into these parents hates and insanity. Will you help support Kate? Will you write a letter to the state attorney, will you come sit in the court room and show your support, will you wear Kate's bracelet in support of her? Will you pray, will you speak your mind to these other parents in regards to their actions? Will you help our family?"

How many of us as young people fell heads over heals in love with someone a few years different in age? Why does this consensual relationship have to ruin Kate's life?
.
Please sign the petition: Free Kate....

And if you would like to help the family cope with their considerable legal fees, you can do so here.