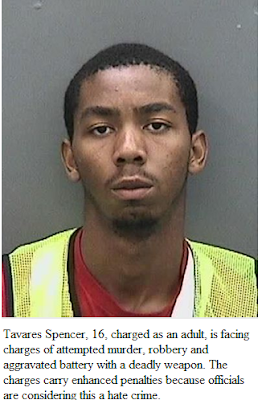 Tavares Spencer is charged with attempted murder, robbery and aggravated battery with a deadly weapon. The charges carry enhanced penalties because officials are considering this a hate crime.

Spencer met the victim Coco McDonald, at a party April 9th and invited her to meet a week latter at 5014 N Winnie St. in Tampa. The house was vacant and the meeting turned out to be a trap. Coco told Bay News 9 "I tell anyone, whether its platonic, intimate, I let everybody know because I'm not ashamed of who I am. I'm very confident about my sexuality,” said McDonald. "I'm transgender, if you really don't want to have any dealings with me I understand, but I'm just letting you know so there's no confusion."

Coco makes it clear that she makes no bones about being transgender, a fact that is at odds with the the majority of news media articles which inevitably state she is a man and imply that she tricked Spencer into meeting her believing she was a 'real' woman.

*Trigger Warning: There are many transphobic media reports about this, some that I have used as sources that blatantly use problematic verbiage to revictimize Coco. The embedded video from ABC was the only one I could find that made any attempt at using the AP Style Guide in stark contrast to the highly problematic accompanying online article TPD: Tampa teen charged with a hate crime after shooting a man in woman's clothing

WTSP reports "Police say Tavares was already in jail, arrested for an unrelated crime when they charged him."

"A warrant enabled them to check his cell phone, which they say contained text messages making defamatory statements about Coko's lifestyle transgender status. The messages were sent within an hour of the crime."

"It was enough to charge him with a hate crime... for which he did not seem sorry, say detectives."

"He wasn't willing to make a lot of statements, but my detectives were taken by his lack of remorse in this incident. He showed very little to none," said Sgt. Michael Stout.