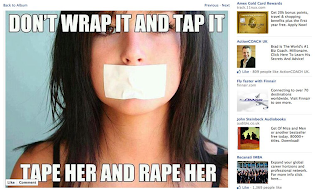 Facebook has refused to listen hundreds of complaints about pictures like these two screen shots glorifying and enabling violence against woman.


Facebook's subjective decisions based on immoral misogynistic greed is not news to the transgender people. In 2010 We fought and succeeded in forcing Facebook to allow transman Dominic Scaia's post SRS profile picture.

To the larger feminism community and allies facebook irresponsibility was also a call to action. Laura Bates, founder of "Everyday Sexism" one of the leaders of the action told XO Jane she had seen a lot but was especially horrified by the....

•Images of disabled girls, with men underneath and the caption “No arms, no legs? No Problem."
•Images of women’s faces contorted in pain, pictures of girls screaming.
•I have seen photographs purporting to show actual rape.
•Videos of women actually having their heads hacked off with a short knife as you look into their eyes less than a metre from the camera. After that one, I couldn't eat, work or concentrate for several days. A week later, when I tried to watch a film that included an unexpected beheading scene, I found myself suddenly shaking, in floods of tears again.

The problem being that most of the pictures were being posted by individuals using easily accessible meme generators. Since Facebook refused to take responsibility they took it twitter with @EverydaySexism using the #FBrape hashtag in conjunction with Woman, Action, Media (WAM) they have had considerable success shaming the advertisers to pull there adds until such a time as Facebook follows there own guidelines. 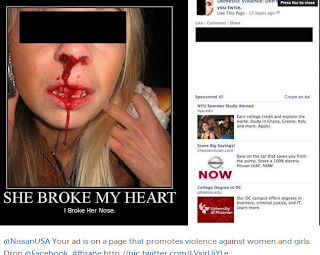 Personally I think facebook is disgustingly greedy and uncaring. Please take a moment and take action with Woman, Action, Media (WAM). Let these advertisers know we are aware that they are supporting violence against woman. Demand they remove their support of Facebook too.