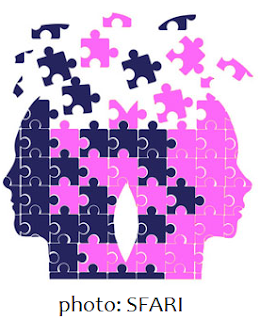 Disclaimer: I am a not endorsing or discrediting this study, only reporting on it hoping to enable a discussion.

The recent Time article titled "Study: Why Some Transgendered People Have Higher Levels of Autistic Traits" incorrectly frames this study as conclusive. It is not, nor is its methodology empirically sound. All of the subjects responded online to a questionnaire that is based on the "extreme male brain" theory. But the conclussions bear examination. Co-author, Emma Martin, herself a transwoman, said in a statement “This new research reminds us that gender incongruence is incredibly complex. Every possibility should be discussed with new clients, but should not delay what can be a painfully slow process for those affected.”

It's in that vein I will continue.

"The ‘extreme male brain’ theory suggests females with Autism Spectrum Conditions are hyper-masculinized in certain aspects of behavior. We predicted that females with Gender Identity Disorder (who are masculinized) would have elevated Autism Spectrum Quotient (AQ) scores. AQ scores from five groups were compared: (1) n = 61 transmen (female-to-male transsexual people); (2) n = 198 transwomen (male-to-female transsexual people); (3) n = 76 typical males; (4) n = 98 typical females; and (5) n = 125 individuals with Asperger Syndrome (AS). Transmen had a higher mean AQ than typical females, typical males and transwomen, but lower than individuals with AS. Transmen have more autistic traits and may have had difficulty socializing with female peers and thus found it easier to identify with male peer groups."

"Baron-Cohen has long theorized that people with autism may have what he calls an “extreme male” brain — dominated by a style of thinking called “systemizing,” which focuses on predictable patterns like those found in mathematics or mechanical devices. He contrasts this with a cognitive style called “empathizing,” which allows for better understanding of the minds and emotions of others."

"Why the difference? Baron-Cohen and his colleagues recently found that giving testosterone to women decreases their ability to empathize, particularly among women whose bodies show evidence that they were exposed to higher levels of testosterone in utero. And previous research has linked high levels of testosterone in the womb to autistic traits. (Interestingly, in-utero exposure to testosterone can be estimated by looking at the ratio between the length of the ring finger and index finger.)"

It may seem that it's a no brainer stereotypically trans men trade a sense of heightened empathic sensitivity for masculinity while transitioning with testosterone. At first glance it would make sense to me because the opposite is true for me as I have realized increased empathic and cognitive skills since transitioning with estrogen.

But I have lived with a trans man who would contradict that theory. Quite the opposite, he delighted in the enlightenment his natal birth gave him and was empowered by his masculinity to merge the two traits together to become the highly successful therapist I knew him as.

Aspergers. It's a discussion trans people must not to be afraid to have.