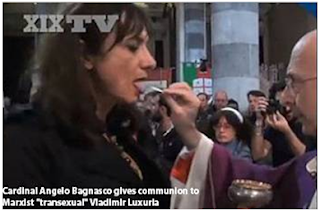 Lifesite News was not thrilled that Angelo Bagnasco, the Cardinal Archbishop of Genoa was seen giving Communion to Luxuria, and another transsexual at the funeral of Fr. Andrea Gallo.

I think it was the Christian thing to do but not so much novusordowatch.org which reported on this using quotations to signify their contempt, that "Cardinal" Angelo Bagnasco, the "Archbishop" of Genoa, Italy, giving what he thinks is Holy Communion to a man who could hardly be more unworthy of it: Vladimir Luxuria, a Communist male politician who cross-dresses as a woman and likes to be identified as female. Luxuria strongly and actively supports causes promoting "rights" for homosexuals.

Oh well, we can't make everyone happy all the time can we? But we need to make God happy and we can by welcoming everyone to his house, including transsexuals, as he has instructed us to do.

Source Facebook: Vladimir "Vladi" Luxuria born Wladimiro Guadagno in Foggia, Apulia (June 24, 1965) is an Italian actress, writer, politician and television host. Luxuria was a Communist Refoundation Party member of the Italian parliament, belonging to Romano Prodi's L'Unione coalition. She was the first openly transgender member of Parliament in Europe, and the world's second openly transgender MP after New Zealander Georgina Beyer. She lost her seat in the election of April, 2008.

Although Luxuria lives exclusively as a female, she has not undergone sex change surgery remaining physically and legally male. She has stated on occasion that she perceives herself as neither male nor female.