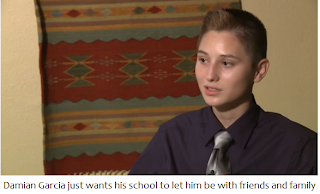 “I just want to walk in my black robe, nice and proud and have that memory to look back on with my family and friends,” said Damian Garcia. “I would rather not walk than to embarrass myself by wearing a female robe.”

Damian will not be allowed to walk in a males black robe May 22nd even though he has legally changed his name. Saint Pius High School is demanding that he wear in a female white robe because he has not had medical surgery altering his chest to present a male appearance, the prerequisite to changing the gender on his birth certificate in New Mexico.

Some state still demand unnecessary medial intervention for physiological issues before allowing their citizens to pursue a life guaranteed by the constitution.

New Mexico will produce a new birth certificate, with both name and sex changed, and seal the old birth certificate. However, a letter from a surgeon documenting Sex Reassignment Surgery (SRS) is necessary, prohibiting those who cannot afford or do not desire SRS from amending their birth certificates. Female to Male SRS can cost between $12,000 and $20,000 in addition to years of costly therapy and hormone replacement therapy(HRT)before SRS can be considered.

Two unrelated children, Will 8 and sibling Phynn 12, were so upset after viewing the KRQE news report about the way Saint Pius High School is treating Damian they "refused to go to bed until our mom agreed to help us fix this". So together with mom they began a facebook page "Let Damian Walk and started the Move on petition "Let Damian walk for graduation in male cap and gown" which had 9,000 signatures as of this posting.

Note to school administrators. Will and Phynn are your future students or not, in the case of private institutions like Saint Pius High School with open bias against LGBT minorities.

Principal Barbara M. Rothweiler's welcoming letter states her school is geared towards furthering students education and that 98% of her students go on to university. Her selling point is substituted by pointing out that "Some of our recent graduates can be found at Harvard, NYU, Stanford, Notre Dame, and Brown."

Out of all of those schools Principal Rothweiler so proudly listed only Notre Dame does not include LGBT inclusive clauses. The other top 20 universities do. When students and parents shop for preparatory schools like Saint Pius High School, LGBT inclusiveness is a major indicator of the quality of education they will receive their regardless is they are LGBT or not. Discrimination against any minority is not acceptable.


Graduation gown a problem for transgender student
President Obama's it gets better message:
Posted by planet trans at 11:56 AM