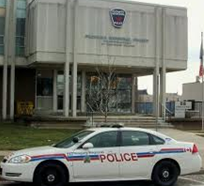 ST. CATHARINES, ON (WKBW) - The Niagara Regional Police Service is investigating a sexual assault that occurred along the Twelve Mile Creek at Glendale Avenue, in the city of St. Catharines early Monday morning.

Police say around 2 a.m. a transgender male was walking along the east side of the creek when he was grabbed from behind by an unknown male.

According to police, the suspect put a knife to the victim’s neck and threatened to kill him if he did not comply. The suspect sexually assaulted the victim and left the scene on foot.

The title could really do with a comma after assaulted.

For a while, I was reading it thinking that police assaulted the transman or something.

Done. Thanks for mentioning that.