Is Miss Universe Contestant Jaclyn Schultz Under The Transgender Umbrella? 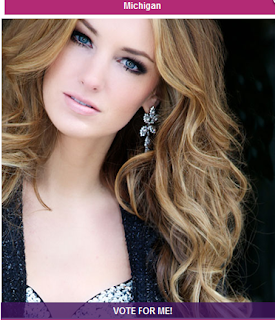 Some folks are rushing to proclaim that with Miss Michigan competing we have someone under the trans umbrella in the Miss Universe pageant. This could be true, but it depends on whom you ask.

Most importantly, how does Jaclyn Schultz identify?

She hasn't to my knowledge identified as intersex, but thats OK too. This still gives us a wonderful opportunity to learn about her unique condition and the historic intersectionality that exists between MRKH and Intersex identified people.

Jaclyn Schultz a spokesperson for Beautiful You MRKH Foundation is courageously making headlines helping to educate people about this unique congenital condition, demystifying it and humanizing those with it. Much the same as we who identify as trans endeavour to do. This brave woman needs our help moving her to the semi finals. We can do that by voting for her here. 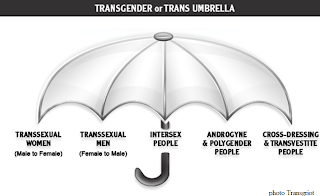 According to MRKH.org "MRKH is a congenital condition (which means it is present at birth) that results from the incomplete development of the female reproductive tract. Women with MRKH have fully functional ovaries that can be located in unusual places in the body cavity. They are genetically female, as they have two X chromosomes and a normal chromosome analysis (i.e. 46, XX). The primary symptoms are failure to menstruate. Typically, women with MRKH lack a fully functional uterus, cervix and upper vaginal canal. They have normal external genitalia and breast development, and often have a small external vaginal opening, called a ‘dimple’ that looks like a hymen. Although women with MRKH are incapable of carrying children, it is possible for most to have biological children through the use of assisted reproductive therapies and gestational surrogacy."

Medicine.net defines Intersex as:
A group of conditions sometimes referred to as disorders of sexual development (DSDs) in which there is a discrepancy between the appearance of the external genitalia and the type of internal (testes and ovaries) genitalia. The condition was formerly termed hermaphroditism or pseudohermaphroditism. One example of intersex is androgen insensitivity syndrome, in which the body's receptors to male hormones do not function properly. In this case, individuals have a male genetic makeup (XY) and testicular tissue but have incompletely formed or female external genitalia. In some cases, known as true gonadal intersex, a person has both ovarian and testicular tissue

I'm not a doctor or claim to be an authority on ether condition but I noticed a few differences between the diagnosis most notably the development of external organs and the absence or presence of prevalent chromosomes. I fully appreciate I am standing on thin ice here with the Intersex community but please give your allied neophyte sister a little latitude.

Leaving science and dichotomy behind for moment we can examine what is arguably the most important aspect of intersex and MRKH afflicted people, social acceptance. That factor plays a huge role in how a person would identify their condition and subsequently treat it, or not, both medically and physiologically. There is a common thread between people that identify as intersex and those who identify as having MRKH. A sense of being 'less than', a sense of being isolated from 'normal' people and fear of social stigma should their condition become public knowledge.

I found a fascinating dissertation "Intersex and Community" by Esther Morris MRKHorg Newsletter Feb 2002 thats still relevant and even more so because of it's historical context. I have cross posted it in full here:

"A number of people have asked me about my involvement with the Intersex Community. There are many syndromes that are considered intersex, and activists have done a great deal to link us together. We have so much to learn from each other."

"I polled my on line support groups about intersex last summer and I found the groups to be evenly split. Some women replied that they thought they were intersex, but were afraid to admit it. Other women were uncomfortable with the idea of including MRKH as an intersex condition. Identity is purely personal." "In the past year and a-half I have nurtured an insatiable passion for researching gender and sexual anomalies. I get a great sense of belonging that draws me back for more. Researching MRKH has led me down many other paths. I read about other conditions with an understanding of the issues that feels almost too clear."

"My hardest personal challenge with MRKH is the loneliness. Even with a support network there are days I dread being with people because they represent gender; -normal gender. It reminds me that my own sense of gender feels so bare. The emptiness is not from the lack of feeling my gender, but more for where it belongs. Even those who experience gender in different ways still experience their own gender." "I see gender as a civil rights movement still in the stage of breaking the silence. We are bombarded by judgment based on ignorance; painfully impacting the rest of our lives. I keep getting lost in the haze around medicine and its power over basic civil rights. I ache for a distinct focus for my anger knowing it was a collective ignorance that imposed its view. My embarrassment comes not from myself- but from the shock of others. It's reassuring to hear other MRKH women speak of not 'fitting in' because I know I'm not alone out there. But it is infuriating that we are cast to define ourselves as not 'fitting in' rather than offered the place where we can belong." "I would like to think that we have learned through earlier civil rights movements but the minute you mention gender variation everyone scurries off. Even those who have always shown wisdom begin to shudder. WHY DO WE DO THAT? It took me back to the seventies….."

"Ah the seventies. Those of us who remember those years and survived without permanent embarrassment, may remember a time of extremes. I had a paid job at a Women's Center and feminism consumed my life. We worked hard together. We played hard together. Some of us even slept together. It was exciting to watch the world change while being a part of making that happen. It was the start of Women's Shelters, Women's Health, and breaking into non-traditional jobs. It was the birth of Consciousness Raising and Feminist Therapy. We crossed milestone after milestone." "I also remember the 70's as a time to flounder; tripping over our differences in such a way that we often lost sight of our common goals. Even with a common purpose many women were at odds with each other. Lesbians challenged non-lesbians for sleeping with the enemy. Working-class women judged middle-class women for not seeing past their privilege. Women of color demanded recognition. Heterosexual women resented lesbians for being too exclusive. Separatists judged women with male children or pets for their involvement with male energy. There were fights over Christmas trees, Music Festivals, and whose politics were more pure. (We may laugh about it now, but this was serious stuff!). We worked really hard to muddle through all that and I won't lose sight of that lesson now. I found peace in this community and felt very much at home.

And then my secret got out….

"A group of women attacked me because they thought I was transsexual after one of them heard about my vaginal surgery. I was very active at the Women's Center and they wanted me out. They followed me home one night taunting me with slurs such as intruder and freak. They stoned me as they shouted about male privilege I never knew. Knowing feminist rage all too well I was scared, and kept on walking. Eventually they surrounded me; and after a scuffle, I was on the ground. I still remember what was running through my mind as I looked up at them. I choked on thoughts like: "But I AM a woman. I have test results". (To say I was insecure about my gender identity is an understatement.) I wanted to wave my XX credentials in their faces like a shield because I was not "like that". But the stronger part of me held silent, almost ashamed by my need to create this boundary for my own protection. They slapped me around a little and then they walked away. I didn't tell anyone about this assault until I wrote the Missing Vagina Monologue 20 years later.

But the questions it raised have never left me."

"I now open my identity to include a collection of variation. Although the details of our diagnosis may differ; AIS, CAH, MRKH, MURCS, XO, XXY;

I am coming to realize that these acronyms are just my sibling's initials. I see a similar struggle and approach it with a similar view. I have had my personal sense of gender challenged. I have had my body normalized to make other people comfortable. All of the above was motivated by presumption which became white-coat violence the moment I lost my choice. These issues/concerns certainly cross the diagnosis borders and confront all of us at some time or other."

"So am I intersex? I believe that I am. As I grow with my MRKH identity, intersex is a large part of that. Whether it is because my body was born a shameful variety, altered so that it wouldn't be; or the emotional journey that experience has been I don't yet know. I believe I am Intersex because I was never considered normal enough to be left untreated. Intersex can be a community for all of us. It’s a lot less lonely that way. It does give folks something to think about….."

"Let her make her choice – MRKH: intersex or not? You decide."Via MRKH Canada

"I have no wish to get political but it was recently brought to my attention that some of the articles/links that I have been sharing with you may suggest that MRKH is an intersex condition. In reviewing the literature, sometimes MRKH may be mentioned as part of a document on intersex conditions but it itself is not considered an intersex condition. MRKH is classified more as a syndrome of congenital anomalies (structural abnormalities occuring during fetal development). My job here is to present the literature, educate you and allow you to decide what you identify yourselves as. We are all 100% women, always remember that!"

"This being said, I do not want to discriminate against those who choose to identify themselves as intersex. It is all a matter of choice. Some MRKH women who identify as intersex are met with considerable resistance by the rest of the MRKH community. I think we should all respect the choices and opinions of others. The controversy can cause younger MRKH women some confusion and it is not up to anyone to decide what she identifies with. Without fear, we should be providing all the options without the baggage of our own personal beliefs. So please respect our sisters and accept her regardless! There is enough prejudice without harbouring it in our own community."

Nope she's not under the trans umbrella. But neither should we let that stop us trans women from supporting her.