Transgender Womans Avcılar, Istanbul Apt Shot at twice and and set on Fire 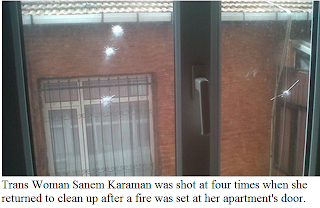 Transgender woman Sanem Karaman's life is in serious jeopardy and the police have been reluctant to help.

Karaman told Bianet.org  that she believes the person who shot at her at the Meis Residence on the 20th and again on the 21st was the same one set it on fire five days ago.

Karaman said she believes this criminal was also involved with other attacks against transgender people at the residence and possibly was with the ones who murdered transgender woman Seda at the residence in March 2013. Seda was beaten so badly she died three days later after being taken to the hospital.

The police have made only token efforts to find the perpetrator and in fact, might be enabling them by all but ignoring threats being leveled against the transgender residents.

Karaman told Bianet "They burnt down my entrance hall three days ago. We had no running water because the pipes had burst [as a result of the fire]. As soon as the pipes were fixed, I began cleaning. At that moment, four shots were fired at my window. I was wounded because of a piece of glass that hit my eye; I have a medical report from the hospital.”

“Today, I opened the window to my bedroom to air the house. They fired shots again right then. The bullets seemed to come from the building right across. As far as I know, there’s a pilgrim staying at the apartment right across from mine. I don’t know him, we’ve never talked before.”

Pressing charges of “intentional injury and threat” , Sanem Karaman, said that the police came after the events today and that they are currently waiting for the crime scene investigation unit [One of the other transgender women living in the same building, Michelle Demishevic, a reporter on İMC TV tweeted that the csi unit never showed up and instead Sanem Karaman was called to report to the police station]. “I’m staying at my friends’ house right now. As soon as the csi unit complete their investigation, I’ll go back home. I’m scared but I have no other choice,” she said. (I was unable to locate that tweet).

It couldn't be too hard for the police to ascertain who shot at her window given the floor she lives on. The rounds must have been fired from a window across from her. If the police then found out who has had acesss starting March of 2013 they probably could locate the criminal and put a stop to the violence.

If they wanted to that is. According to the local LGBT group SPOD.org the police have not made any significant effort at the Meis Residence to bring the perpetrators to justice.

This article's source is in Turkish on Bianet.org and was translated by Typing Animal on Wordpress.