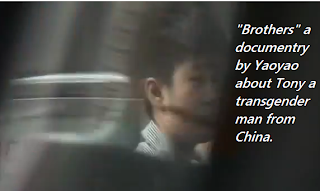 In 2012 a competition was held for fledgling Chinese directors who aspired to make documentaries about LGBT topics. Out of dozens of applicants two projects were chosen. One project about transmen was picked up because the subject has received so little attention. Chinese transgender men share a peculiar blessing universally with all queer comrades worldwide. Many meld seamlessly into society which is why so little is known of their lives, joys and struggles. We see transmen day to day like vague distorted images seen through a moving vehicle's window.

Yaoyao, one of the winners runs a photo studio for lesbians in Shandong province '... works in an organisation with quite a few transgender people and she already has the permission of one of them to film the whole process [from female to male],’ Stijn Deklerck of Queer Comrades told
Gay Star News in 2012 . ‘And that's a story that hasn't really been covered in China. There have been quite a few documentaries and films about male-to-female transgenders, but there's not been very much on female-to-male.

That's about to change. The Netherlands Embassy in Beijing, Queer Comrades, the Aibai Culture & Education Center, the Beijing Gender Health Education Institute and Common Language are holding an event in connection with the International Day Against Homophobia and Transphobia (IDAHO) on Friday 17 May, 14.00 – 17.00 pm.

The event is hosted by and will take place at the Netherlands Embassy in Beijing. It will consist of the premiere of the documentary “Brothers” produced by the LGBT organization Queer Comrades (you can watch the trailer here), a panel discussion including Yaoyao (director of thedocumentary), Tony (transgender man, documentary main character), Joanne Leung (founder Transgender Resource Center Hong Kong), Zhen Hongli (psychologist Global Care Women & Children’s Hospital Beijing), and Guo Yanan (Aibai Transgender Program Assistant). This will be followed by an informal networking event where you are encouraged to get to know the Beijing LGBT organizations and their work on transgender issues. The documentary will be provided with Chinese -English subtitles, the panel discussion will take place in the Chinese language without translation.

As seating is limited, please confirm your attendance by writing an email to IDAHO2013@163.COM. We will give priority seating to members of the media, educational professionals and psychological counselors, so please specify your affiliation in this regard.