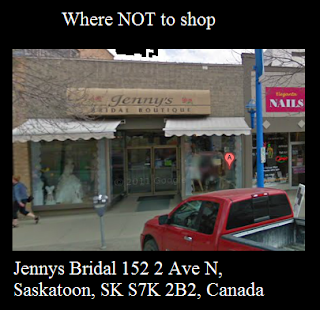 Rohit Singh a transgender woman from Saskatoon was out excitedly shopping for that one perfect dress to wear on her special day and happened into Jenny's Bridal Boutique.

When she found one she wanted to try on she and her fiance were mortified when the shop's owner, Jenny Correia refused to serve her saying "....sorry we don't allow men to wear dresses here," Singh recalled to CBC News. "I said I'm not a man, I'm transgender." 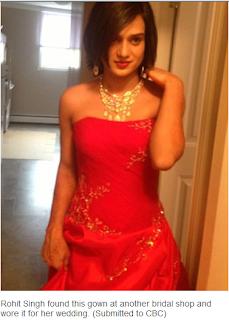 When contacted Thursday by CBC News, the bridal shop owner, who declined to provide her surname, said she stands by her decision.

"To me it doesn't matter," the owner said. "He looked like a man. There was quite a few brides in the store. If you see a man trying on dresses, you're going to feel uncomfortable."

"Singh later found a red gown at My Lynh Bridal, on Idylwyld Drive North, where she described the service as excellent. Singh's marriage took place on Monday."

Krysten Hildebrand from Saskatoon posted this insightful comment by Rohit Singh's mother in law in the Jenny's Bridals google reviews: "I'm more than happy to share this, A friend of mine wrote this...."

"You may or may not know that my son was very recently married to a wonderful person, who is transgender. The reason I am sharing this is that she and my son were visiting bridal shops so she could try on dresses. At one of the shops, Jenny's Bridal Boutique (downtown on 2nd Avenue), she was not allowed to try on any of the gowns by the owner (Jenny).

I was so incensed when my son told me this I called the owner. I managed to stay calm but asked why she wouldn't serve my son's fiancee. She replied that she only serves female customers, that it is her business and she can set the rules.

I asked her she should become informed about transgender people, told her I feel this is a human rights issue (though not illegal), that she had made a wonderful young person feel bad, and that furthermore she would lose business from all the bad publicity that will follow because I work in a large organization, that I have two sisters at the U of S, and we will spread the word, so that's what I'm doing.

Even if she had been the least ashamed or apologetic, it might have been better, but she wasn't. So I am asking you to spread the word about this incident and please boycott her business--she deserves it! Oh, and the good news, my son's fiancee bought a stunning red gown at My Lynh's on Idylwyld--My Lynh is a sweetheart, has beautiful reasonably-priced dresses and is a skilled seamstress-- and was very good to her.


This isn't the only instance of alleged discrimination. It has also been reported in the reviews Jenny Correia and her her staff told a woman in a wheel chair to leave because she was 'marking up the floor'. Another occasion a staff member sneered at a shopper and directed her without prompting to the discount rack making her feel about a inch high.

When I first put it on, it nearly fell back off, but then I got to tightening the corset backing, and it pulled it taught against me, and it holds itself up VERY well! No it fits like a glove!
tory burch flats