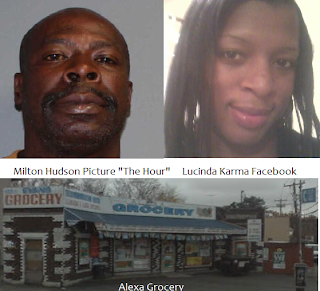 A trans woman and her boyfriend from Bridgeport CT were arrested for a February robbery according to the "Hour's" problematic headline "Warrant: Transvestite and boyfriend beat man until he was blind in one eye". It is not clear how the Hour ascertained with any degree of certainty that Karma is a 'transvestite'. The HOUR is the only news source I could find that is reporting on the arrests.

"Hudson and Karma were arrested Sunday, and Jimenez was arrested Saturday. All three suspects were unable to make their bonds after their arraignment Monday at Norwalk Superior Court and are being held at the Bridgeport Correctional Center, a prison for men. Their next court date is June 6."

"Hudson told police that he assaulted the victim, because he was defending the honor of his transvestite girlfriend Karma, police said."

"Both Hudson and Karma said Jimenez went through the victim's pockets after Hudson knocked out the victim, police said. Court documents show that Karma positively identified Jimenez as the third suspect."

Read more at The Hour.

Why not just let a sleeping dog lie, after all the Hour mug shots of Karma doesn't portray her as female? There has already been confessions made and some degree of culpability established and as a community we have to confront the good, the bad and the ugly fearlessly or faux and others will do it for us.