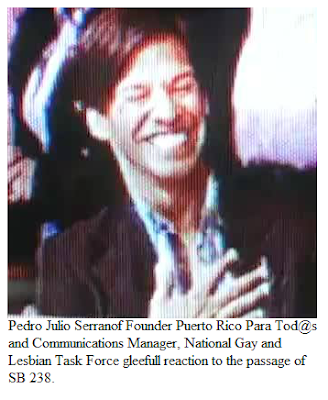 
"Who the hell LGBT activist wise was watching the Puerto Rican legislature and the governor's office to ensure the tougher bill was the one that received Governor Garcia Padilla's signature? Instead of doing the civil rights job right the first time you'll now have to (like Massachusetts is painfully doing right now) go back to the Puerto Rican Legislature and refight the pitched battle you just fought to have those categories the Senate just stripped out added back into the law."

"A human rights law without public accommodations language in it is not only unjust, it's a worthless law."

It was all over the Internet via Gay media and the NGLTF saying they passed a inclusive law. Heck, even Mara Keisling said they did....Or did they?

It was really difficult to find out. The Puerto Rican Legislature website has no direct links to bills and nether does the Puerto Rican governments. So I had to trace the bill through both houses using multiple media reports.

I found out what happened not by what was announced, but what was not talked about. We were quietly thrown under the bus.

Apparently the House bill was stripped of public accommodation provisions in a deal with right wing politicans and fanatical religious zealots to get Bill 488 passed, amending the "Law of Prevention and Intervention in Domestic Violence" providing equal protection to all couples regardless of marital status, sexual orientation or gender identity.

To answer Monica's question, Pedro Julio Serrano a native of Puerto Rico and communications director for the NGLTF was the one we trusted to watch over the bill.

Serrano's May 16th video recorded his reaction when the Puerto Rican Senate on Thursday approved the non-discrimination bill that would ban anti-LGBT discrimination in employment, housing, public accommodations and government services in the U.S. territory.

But there was little fanfare when the house passed the legislature and subsequently signed by the Governor,  only this announcement and this press release on May 24th making no mention of what was sacrificed:

"Today is a thrilling day in Puerto Rican history. A decade ago, LGBT Puerto Ricans were criminals under the sodomy law, today we're second-class citizens and when this bill is signed into law, we will be closer to achieving the first-class citizenship that we deserve. Equality is inevitable. Puerto Rico will be for all."

"The Puerto Rican LGBT community has endured an epidemic of anti-LGBT violence that has taken more than 35 lives in the past three years. Nonetheless, this community has continued to stand strong in the face of adversity and today can celebrate this glorious victory. We thank all the activists that have been part of this effort, especially our own Pedro Julio Serrano, who has been a steadfast and uncompromising leader in this struggle."

The question then becomes "who is watching the NGLTF? We did it it in 2010 when the NGLTF and HRC tried to trade a non discrimination bill sans public accommodations for gay marriage in Maryland.

Equality Maryland left that battle with their tail between their legs, their lies exposed, humiliated with members deserting them by the hundreds. They learned the hard way not to fuck openly with the trans community. A lesson evidently not lost to Gay.com this year in Puerto Rico. Do it quietly. Keep it hushed, trans people will wake up under the bus not knowing what hit them.

It's a sad state of affairs when we as poor trans people without the resources that these behemoth gay.coms have must fight, scratch and claw, THEM for our most basic rights.