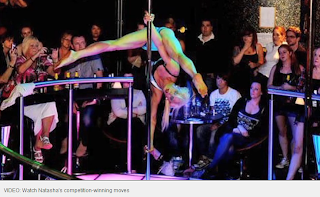 Natasha Payne's road to the World Pole Sports Championship 2013 wasn't a easy one however the difficulties she has had to overcome have all have centered around the physical challenges of the sport. Being able to concentrate on competing has allowed her a chance at the championship. Natasha told Sky : "The girls have been so welcoming. I've come across no barriers, they've been so accommodating it's unbelievable, even down to things like changing rooms.

"It can be hard, many people like me can end up just at home isolated. I'm so lucky, I've met so many friends through pole dancing."

"I'm really excited about the competition and I'm just looking forward to taking part. I've not met any other transgender pole dancers yet."

There's reasons for that Natasha! Many trans peeps including myself, haven't the physical abilities that you have and would be extremely uncomfortable being judged and scrutinized so carefully in phosphorescent lighting! A fact not lost on other competitors, I'm sure. You are our heroine! Go Natasha!

What Joe so bravely attempted is is captured here in this video clip of the 2012 championships.

Be inspired by our international athletes. Join us at the World Pole Sports Championships 2013 at York Hall Bethnal Green London. The IPSF is a not-for-profit organization run by dedicated members of the Pole Sports Industry, who donate their time and energy for the promotion of Pole Sports.