Over Half of LGBT homicide victims in 2012 were transgender woman: NCAVP Reports 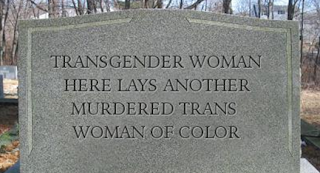 The report also found that 53.8% of anti-LGBTQ homicide victims in 2012 were transgender women. This is a considerable increase from 2011 (40%) and continues a three-year trend toward disproportionate and severe violence experienced by transgender women.

Anyone who reads planetransgender with any regularity has seen the seemingly endless cascade of posts about the horrific violence being suffered by transgender woman of color, like the preceding article.

Nearly all of these murdered transgender woman worldwide were 'in the wrong place at the wrong time' meaning at a place of risk because of the prevalence of crime in that particular area. I am not victim blaming but I am skating on the proverbial controversial thin ice, being white and having the good fortune of being employed and having decent housing.

Socio economic conditions have forced our sisters and brothers into these situations, enforced by overwhelming daily stigmatization. They are told ever day by people outside the LGBT community they are 'less than', with glances, stares, shouts and violence. What can we do as a community to raise up the most marginalized of our community?

Be creative. This is a project for myself too. Think about this. What can I do. Myself. Personally? Then take action. I'm a poor blogger, but even that feels like a cop out sometimes. I cry every time I post another heart wrenching tale, but my tears won't solve anything. I need to do more. Now.