FBI Raids The Anonymous Member Who Outed The Steubenville "Rape Squad" And Threatened Him If He Talked About It! 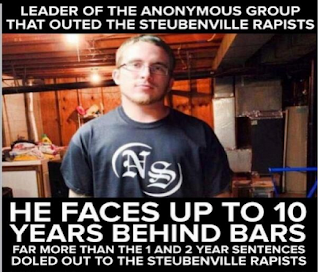 NO ONE would have known that a 15 year old had been raped had it not been for a intrepid blogger's investigation who after being stymied by officials alerted KightSec in desperation. She knew the police, judicial and administration of Steubenville were in cover up cahoots. They were perfectly happy to sweep this rape under the rug and deny justice just to save the 'good name' of the local football team, Big Red.

The collective Anonymous became involved and threatened to release the contents of a hack revealing alleged child pornography in the Roll Red administrators  email account. Judging by the hits my blog received after I posted that article, that threat was what scared the local officials the most. It still scares them. They invaded this mans home knowing perfectly well another person admitted to the hack.

So in retribution the FBI has raided Deric Lostutter, a KnightSec members home, seized his computer, terrorized his family and pets and maliciously vandalized his home. What makes this last governmental crime Even worst was their their threat of legal actions should he make public those events.

KYAnonymous has set up 'home page' on which Deric Lostutter tells of the ordeal:


I had been expecting a T-Shirt in the mail from ShieldTactical.com and what appeared to be a Fed-Ex truck was parked in my driveway. As I open the door to great the driver approximately 12 F.B.I. Swat Team agents jumped out of the truck screaming for me to "Get The Fuck Down" with m-16 assault rifles and full riot gear armed safety off, pointed directly at my head. I was handcuffed and detained outside while they cleared my house. My brother soon emerged later with his new girlfriend, both bewildered that the F.B.I. was at my house seeing as I have no prior criminal history, both of them in handcuffs as well. The Swat team left my belongings in the floor, my dogs shocked, my family nervous, my garage door battered open with a ram though I stated I had a key, and the RV camper window broken for entry though I stated to pull hard on the door. 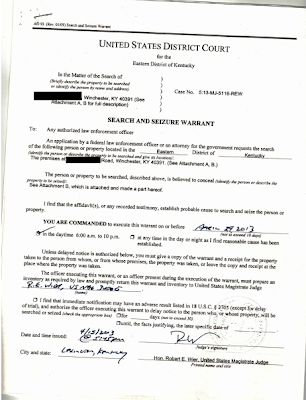 Looking around I seen the Swat Team of course, a few fbi detectives from Columbus Ohio, Lexington KY, and Louisville KY. Also with them were a state trooper or 2, a local sheriff, and shortly thereafter the buildings were cleared the CIS labcoat wearing "Geek Squad" so to speak who analyzes your "evidence".

I was detained on the back patio, I asked if I was going to jail, they said no, they said who are you, I responded KYAnonymous. They asked me a few questions, asked me for my passwords for my account, stated that I could not tell anyone I was raided or I would face additional charges such as "destroying/tampering with evidence".

I was emailed their intent to send out a "Target Letter" which means they are going to try to indict me for a Federal Offense, (most likely a felony and two misdemeanors) to a secret Grand Jury of 23 individuals, for which I can not be present to state my side, nor state my innocence. Let us not forget that Batcat did the hack, as stated in the Herald ARTICLE HERE which by all accounts is a clear admission of guilt. So I am curious to see the charges, as is the lawyer I have teamed up with, Jason Flores-Williams of the WhistleBlower Defense League.

Now in all fairness there was a controversy regarding the propriety of Anonymous acting without the govermen'st permissions on this vendetta for justice.

I honestly believe that without social media's ability to reach the public the government would do whatever whenever it wishes as they have recently contemptuously displayed.

The final words of the KYAnonymous sums it up:


You do not have to be technical, you do not have to be "Anonymous", you just have to have the initiative, the drive to volunteer, to change the world. Plant a tree, Raise a forest. Speak out publicly against bullies both in school and workplaces. Volunteer to clean up disasters, Volunteer at a local soup kitchen, whatever it is you do, commit one good deed a day, or hundreds if you wish, and simply ask those whom you help to "pay it forward."

Go out now, and promote the idea that is #ProjectKnightSec