Transgender Kenyan Awarded $2,332 For Police Publicly Stripping and Humiliating Her 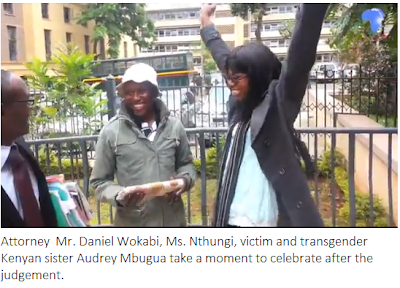 Identity Kenya reports that those were Alexander Ngungu Nthungi’s words after Lady Justice Mumbi Ngugi declared that police violated her rights and dignity by stripping her naked to ascertain her sexual identity.

“The judgment has given me renewed hope; I will no longer have the fear of being a woman. Now I am free and I feel those like me having transgender problems should come out and fight for their rights,” said Ms. Nthungi during an interview with the Nation on Wednesday.

By her side was Andrew Mbugua, who has been engaged in a running legal battle to be officially recognised as a woman and be known as Audrey Mbugua.

In January 2011, Nthungi was at work in her grocery shop in Thika town, dressed like a woman when she was arrested and taken to Makongeni Police Station for questioning over claims of assaulting another woman.

While at the station and in the full glare of the media, an officer stripped her naked claiming they wished to identify her gender.

The Nation reports that although transgender Kenyans have won a victory immense work lays ahead.

On the outcome of Nthungi’s case, Audrey Mbugua founder of Transgender Kenya said: “Although we are happy about the judgment, the judge should have compelled the police to offer a public apology. Sometimes it’s not about being compensated with money but being recognised as human.”

Their lawyer, Mr Daniel Wokabi, said transgender persons should be classified as “a special need group” so that their rights to dignity are respected.

“Issues of transgender ought to be dealt with a lot of caution and restraint. They are human and people should appreciate the pain they undergo in trying to identify with another gender,” Mr Wokabi said.

The Constitution, he said, recognises the rights and dignity of such people.

He urged individuals having the same problem to come out in the open to have the issues resolved in line with the Constitution without fear of public perception.

Email ThisBlogThis!Share to TwitterShare to FacebookShare to Pinterest
Labels: Kenya