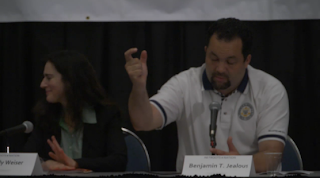 This is why we liberals win at the polls. We have an agenda the encompasses the vast majority of Americans and have become increasingly successful at meeting at the intersection of our communities concerns. But the most empowering element of our movement is we embrace the concept of freedom and democracy for everyone.

This rebroadcasting of a ultra right wings take on Ben Jealous' statement is a prime example of why the right wing is losing and will continue to lose. Their binding thread is hate.

National Association for the Advancement of Colored People (NAACP)President Benjamin Jealous threw out a bizarre, new reason Friday for Voter ID laws to be banned in the U.S. –transgenders.

“As many people know, I have an adopted brother who’s transgender and he typically doesn’t dress the way he does when he hangs out in the Tenderloin when he goes to a government office,” Jealous said, referencing a notorious LGBT community in San Francisco. “And so if you show his ID you know and he would hold it up to his face, it looks like two different people.”