ABC 13 reports: HOLLYWOOD, LOS ANGELES -- Police have released dramatic surveillance video showing a vicious attack on a transgender woman on a Hollywood sidewalk. They are hoping the video will help them track down the suspects.

Vivian walks away from the men, heading toward Vine Street.

"At that point, one of the males ran up behind Vivian, striking her from behind, knocking her unconscious, it appears on the video, to the ground. And then the rest of the group joined in and brutally assaulted Vivian by kicking and punching her," said Reina.

The victim had to spend a week in the hospital. Authorities are still trying to determine if this was a hate crime. 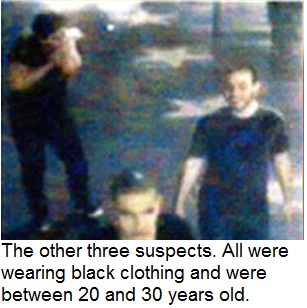 The suspect who knocked Vivian down was described as a white male between 20 to 25 years old with blond hair. He was wearing a white T-shirt with a "YSL" logo.

The other three suspects are around the same age. They were wearing black shirts and black pants. Authorities are hoping witnesses will help them track down the attackers.

"As you can see in the video, there's people around, there's cars driving by, so we're asking anybody that happened to see this incident to contact us," said Reina.

A $25,000 reward is being offered for information leading to the arrest and conviction of the suspects. Anyone with information was asked to call Los Angeles Regional Crime Stoppers at (800) 222-TIPS or online at http://www.lapdonline.org/report_a_crime