PGN you just got Glitterbombed in the finest trans tradition.
At issue is the Philadelphia Gay News (PGN) response to the trans community's outrage over allowing Victoria Brownworth, a known TERF, to use it's media platform to lecture trans people about the abhorrent social conditions the most vulnerable of our community face. Conditions she is responsible for creating through decades of violent anti trans TERF rhetoric.

I have posted the entire PGN post here in italic type and have made rational responses to it in bold type:

"Last week, PGN began a series about transgender sex workers, exploring these women’s lives, from the endemic discrimination they have faced to the physical and sexual violence they’re confronted with on a daily basis. Following the piece’s publication, there were a number of questions raised about the writer’s attitudes towards the trans community. As a publication that serves the entire LGBT community, PGN takes each and every reader response seriously and wants to ensure that all readers feel represented in and by this paper."

"While this piece has elicited a range of responses, no one could argue against the importance of examining the issues and people in this series. The “T” in LGBT represents a community that is disproportionately affected by a range of societal ills — discrimination in housing and employment, violence, access to health care and proper medical treatment, among many others. Sex workers, in particular, are at increased risk of being victimized, and because of stigma, these women continue to be in danger every day. But their plight is often off the radar of the rest of the LGBT community, not to mention the mainstream population; these women and their stories need to be heard and humanized — and this was the primary goal of this piece."

"This series was pitched to PGN by Victoria Brownworth, a former PGN staff writer and longtime contributor, who also writes for a number of other national LGBT publications and has won a series of national journalism awards. Some readers have contended that the piece should have been assigned to a transgender-identified writer. However, PGN does not take into consideration factors such as orientation, identity, race, age, religion, etc., when assigning stories; while it is vital that the writer has an understanding of the community about which he or she writes, PGN does not have a policy that the writer identify with that community. And, as always, PGN welcomes pitches by writers of all backgrounds."

Even ones who have dedicated their lives to marginalizing the transgender community and questioning our right to exist?

"That said, it has been also been argued that this particular writer has made comments in the past that suggested anti-transgender viewpoints. PGN was unaware of these previous incidents and that may have factored into our editorial discussion."

REALLY! Just a few days prior to Brownworth's PGN article she published saying the that trans woman are really men who can't partake of real woman's spaces because transwoman have penises!

Its ludicrously patently absurd that PGN continues to deny knowledge of that article or it's context.

"Each writer and staffer at PGN comes from a different background and holds different perspectives, based on his or her own experiences, about personal identity. Just as the LGBT is far from monolithic, ideas about what it means to be L, G, B or T are wide-ranging. Differences, however, should not close the door to discussions."

"Brownworth was criticized by some readers for instances in which she expressed support for women-only space, comments that some interpreted to mean that she did not include trans women in those spaces. Each comment, however, should be looked at separately and in full context. For instance, in a recent piece about the Michigan Women’s Festival, Brownworth wrote that the event should be a place for women to be women. But, she contended, she was not suggesting that transgender women should not be welcomed, rather that the event should be a time for celebration of women, of all identities, without political arguments. The festival has long been the subject of a debate about trans inclusion, which has drawn a range of opinions from throughout the LGBT spectrum." 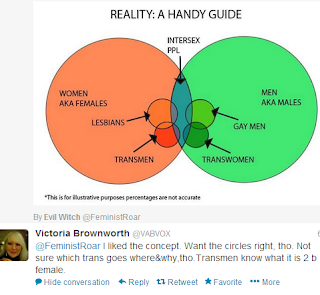 Substituting a few words in Brownworth's MWMF article easily switches trans for gay, the minority that Brownworth was bashing. Would PGN have welcomed dialogue about that?

"MWMFLife is about woman who are oppressed by gay men every minute of every day being free of that oppression for one week of their year or possibly their lives and reveling in that and celebrating each other, just like the Greek picnic is about solidarity among African-Americans who are oppressed by racism every day of their lives being free of that in all-black space."

Brownworth then asks would it be appropriate for white people to have a 'camp Caucasian gay outside of the Greek picnic (comparing it to camp trans) ...

"But if you can’t leave your male privilege there, as well as your penis, then MWMF life is not the place for you gays and your presence will harm other women who, like me, have been brutalized by gay men. It will also alter the atmosphere for every woman who has come specifically to be in women-only space because they will feel just as constrained as they feel in straight society."


Regardless of where you fall on the Michigan Women’s Festival issue, or other conversations about gender and identity, having an open discussion about and respecting one’s differences should not be out of the question. As reporters, we at PGN talk with people every day — some of whom we share similar ideologies with, and others not so much. But we have seen firsthand how integral it is to not shut down conversation when another’s viewpoint digresses from our own; remaining open to the other’s experiential opinions can be dually productive.

To which gcvsa responded so succinctly pointed out :

“It may be politically expedient to hold people to what they wrote in college, but it’s not politically or intellectually honest.”

"No, actually, it is the height of political and intellectual honesty to hold people to account for their published views. What is intellectually and politically dishonest in the extreme is to whitewash those published views with a blanket statement of “that was in the past” without any kind of acknowledgement that those views were in error. In any case, this isn’t about what happened in the distant past, it’s about what the author published mere days ago, and about what is going on in our community, right now."


But, dialogue is key. If PGN readers have an opinion about a story, we always encourage letters to the editor so that these views can be shared with our readers. And writers themselves welcome individual contacts about their work.

No one has argued against the content of this series. And that’s important. But the debate that has surrounded it has detracted from its impact. Instead of this series being about the trans women who are facing harassment and violence each day and night, it has become about a writer’s personal views. This writer spent money of her own and countless hours with these subjects; there was no malintent to this series.

This response was word for word the same argument Brownworth used in comments defending the PGN article and so closely resembles the nefarious methodology TERF's utilize it left the trans community wondering if it hadn't been written by Brownworth herself.

As most journalists who write for community newspapers can attest to, this work is not motivated by love of money — it stems from a passion for the craft and for the community. And the community is what needs to be the focus here.

Really Mr Sir? I write but unlike your contributers remain unpaid so as to keep my standards.

Many trans authors like myself unsuccessfully attempted to contact PGN about this prior to publishing a reply to Brownworth's original article. Oh, so it must be your dialogue dictating to the trans community. In other words PGN has just told the trans community to STFU.

That's a pathetic excuse you published PGN. Transgender people have had to many encounters with TERFs. we have learned there is no dialogue, they are our enemy the same as the most violent hater on this planet with one exception. If they play their hand right like Brownworth just did they can build capitol in their war against transgender people, using the LGB to do their dirty work.

It wasn't the content, it was whom wrote it. She is a TERF. She will use this capitol she gains by this to drive a wedge between gay and trans people. She knew that when she wrote it. She just owned you leaving PGN looking like fools.

Yes, transgender people are at war with TERFs,and make no mistake and if PGN wants to excuse them for it then you are no friend of trans people. That's what got you Glitterbombed.

That's not 'dialouge' PGN! That's gay tyrannically patriarchal misogyny reminiscent of gay journalism of bygone eras. Something we thought was on the decline but were sadly mistaken about.

Seriously PGN trans people were never idiots and with the advent of the Internet we are no longer victims to gay apologists of Trans exterminists. Excusing Brownworth's article, one that should not have appeared on you're pages in the first place is inexcusable.

As a transgender journalist and blogger I would never consider allowing a article from a known homophobic person to be published on planetransgender. If I did by my own fault I would strive to right the wrong and offer a full apology to gay people. I fully expect the same consideration from gay publications.