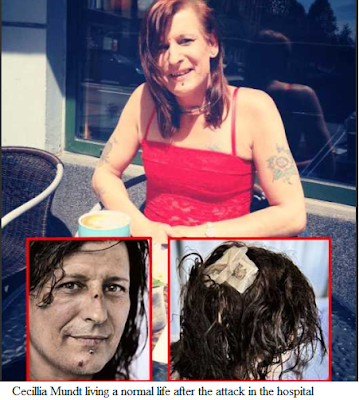 Smiling and grinning a 21-year-old trainee chef from Sønderborg in Copenhagen confessed to a magistrate today that he beat the 48-year-old transgender woman Cecillia Mundt down with a hammer in City Hall Square in Copenhagen.

The 21-year-old, who is on parole for assault, met the 48-year-old at the main train station by chance and asked why he (sic) was dressed as a woman. But the perpetrator denied that hatred of transgender people was the cause of the brutal assault.

“I asked why are you like this. I should not have involved myself, and then he (sic) called me a 'møgperker'” explained the 21-year-old to the police magistrate.

He was angry about this and followed the 48-year-old to City Hall:

“I happened to have a rubber mallet in my bag when I moved a few weeks ago, so I hit the back of his head”, the grinning 21-year-old in the told police magistrate.

“You laugh? You think this is funny?” asked senior prosecutor Maria Cingari.

“No, I just got something in my throat”, said the 21-year-old, but continued the rest of the hearing to smile and chuckle as he appeared relaxed in the dock.

Knows gay men
“I want to be accountable for what I've done. It is not acceptable. I have respect for people who dare to be different and I also know some gay men. It's okay that they are as they are”, said the 21-year-old. According to his explanation, he went only crazy because he was called 'møgperker'.
“He spoke rudely to me”, said the 21-year-old of the transsexual.

He beat Cecillia Mundt in the back of the head, so she fell. Then he ran off and threw the hammer away. He went home to Sønderborg, where he goes to the Technical School, and has a room. On Monday he should have been starting two weeks of work experience as a trainee chef at a hotel in Sønderborg.

Yesterday he called police and turned himself in. He was arrested at 10:10 yesterday.
The 21-year-old stayed at a hotel in Copenhagen when the attack happened. He should have gone home to Sønderborg on Sunday, but chose to stay in Copenhagen to 'get some fresh air'.

Victim in danger
At the hearing it emerged that Cecillia Mundt was in potential danger. She had a three-way fracture on the right side of the head and a piece of bone of 2.5 times 2.5 centimeters was pressed into the skull, but luckily without bleeding. Moreover, the 48-year-old had abrasions on the hands, face and scalp probably from the fall.

The 21-year-old denies that he struck the 48-year-old in the head more than once.

Prosecutor Maria Cingari doubts that the damage could have been caused by a rubber hammer, but according to defender Peter Giersing also a witness described the hammer as a rubber mallet.
The 21-year-old, who is heavily tattooed on the left leg and in the neck, sat in the police magistrate in short black pants and gray hoodie.

He has twice previously been convicted for domestic violence. In May 2009, he was sentenced to 60 days imprisonment for violence by a court in Sønderborg. In August 2011, he was given four months in prison for aggravated assault, also in Sønderborg and he is on parole with probation until 27 January 2014 with 42 days remaining to be served.

He was remanded in custody for 16 days until 24 June, both for the risk of new violent crime and the interests of the gravity of the pffence and the sense of justice.

“Can I go now?” asked the 21-year-old and was with a small smile on his face and was led out of the police magistrates court.

That's just sickening that he comes out with that. I am not a racist and would not dream of calling someone 'møgperker'.

Here he claimed that the motive for his brutal assault with a hammer on Cecillia Mundt on the square was not due to that she is a transsexual, but that she called the 21-year-old for 'møgperker'.

The 21-year-old trainee chef claims he randomly met Cecillia Mundt at the main train station and asked 'why she looked like that' on the grounds that she was dressed as a woman.

Cecillia Mundt changed sex when she was 46 years old, and the police magistrate claimed the accused that he was told that “he (sic) hadn’t shaved” and then he was called 'møgperker'. Therefore he followed Cecilla Mundt to City Hall, where he beat her down from behind with a rubber mallet, which he happened to have in his bag.

“I have never spoken to him.”

“It is simply something he has done. I have never met him before or talked to him before. I have no idea what he looks like and no one stopped me or spoke to me before I felt the attack from behind and fell, said Cecillia Mundt to Ekstra Bladet from her sick bed.

She is convinced that the assault is a hate crime due to her sexual orientation, she is upfront about.
If someone asks me, then I explain to them that I am a transsexual. It's not something I hide. My neighbors are of a different ethnic origin and they respect me 100 percent as a woman. I would never call anyone for 'møgperker' says Cecillia Mundt.

Cecillia Mundt had eaten with a friend who is a journalism student and who is writing a thesis about transsexuals when she went to City Hall and sent a text message along the way. Suddenly she felt the attack in her head and it all went black.

According to doctors, she was in potential danger. Amongst other things there was a large piece of bone pressing into herskull.

“The attacker’s explanation was that he "only" used a rubber mallet, I think he did not.”

“I'm missing a piece of the skull for life. A rubber mallet did not do that, said Cecillia Mundt. Doctors have implanted a titanium mesh in her head instead of the broken skull pieces.”

“I do not know when I will be able to go home. There is enough for a while. I still have severe pain and have an increased dose of pain medication. It is slow sending an SMS message for example”, says the 48-year-old.

But Cecillia Mundt has only compassion for the perpetrator.

“I would like to meet him and ask him why he did it. He must be sick and in need of help,” she says.
The 21-year-old has two previous convictions for violence and was released on parole.