One Suspect Arrested For Beating Of Trans Woman on Hollywood Blvd, 3 Remain at Large 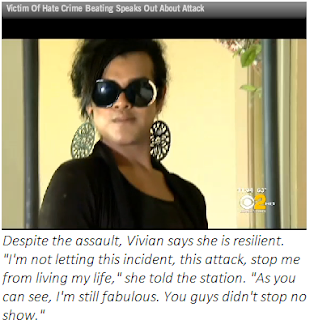 Police are confirming they have made one arrest in the vicious beating of trans woman Vivian Garcia which occurred on May 31st.

Nicol Shakhnazaryan, a 21-year-old Los Angeles resident, was taken into custody on Thursday night and booked for felony battery charges. Three other suspects remain outstanding, police said. He is being held on $1,050,000 bail.

Speaking through a wired jaw she shows whats she's made of  "I'm not letting this incident, this attack, stop me from living my life," she told the station. "As you can see, I'm still fabulous. You guys didn't stop no show." Indeed you are dear Vivian.

Police are investigating the attack as a hate crime, and offering a $25,000 reward for anyone with information leading to an arrest. LAPD investigators have set up a special email account for anyone with information to contact them: hollywoodcrimetips@gmail.com. Anyone with knowledge of the attack can contact LAPD's Hollywood Area Detective Division at (213) 972-2967, or (877) LAPD-24-7 during non-business hours or weekends.