What could be possibly be troubling about a Broadway production with a gay headliner who recently defamed us then tweeted an apology playing a transsexual singer who after a blotched sexual reassignment operation was left with a 'angry' inch compelling her to revert to his masculine self? 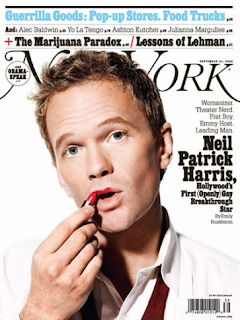 I saw Hedwig years ago. As a young person just beginning to understand my gender it was very troubling and confusing. But I think I am, and hope others are as well, in a better place where I can give a wider birth to gay adaptations, as troubling as they maybe, of the transgender experience. Much like I do with Priscilla.

Besides that, screw the haters, its a incredibly innovative creative freaking comedy.

Well anyways, the gay blogs are already ignoring that this is a sensitive issue for us so I can't wait for Glaad to start hyping it. (snark off).

But there's one more thing, the lead. Harris  knows enough about trans people to be aware of the most harmful verbiage and images. He used all of that while co hosting with Kelly Ripa. Harris tweeted an apology which Glaad of course immediately accepted and excused saying most people don't know 'tranny' is a hurtful word.
Just the ones who murder us, oh and people who could care less about our well being. And the ones who throw it about cavalierly as a joke on national television.

After Inhaling hexafluoride which deepens the voice Harris started doing a Darth Vader impression the switched to the "Silence of the Lambs" character Buffalo Bill, saying "Put the lotion in the basket!"

Harris then announced "I've never sounded more like a tranny in my life."

These gay people, you just never know what they'll do next. Just for the RECORD 'tranny' is not a "GAY" slur. It's dehumanizing defamation that targets TRANSGENDER people.

The 'lotion' was acid that stripped the skin of Buffalo Bills victims so he could use them to make a woman's suit.

The apology by Harris:

NPH is Glaad's current red carpet ticket so they quickly accepted his apology even excusing it:

It’s heartening to see a celebrity of Harris’ stature recognize and apologize for using the slur in such a timely manner, and for greater media attention being paid to its use. Many people do not realize that the word "tr*nny" is one of the most hurtful and dehumanizing slurs that transgender people hear. Most transgender people associate that word with personal experiences of violence, hatred and derision.

Why I don't buy it. Harris knew comparing his voice to Buffalo Bill's and saying he sounded like a tranny would be the easiest way to the top of the ratings. It was premeditated. It was vile. It was disgusting. If Harris was to have apologised admitting to innate transphobia and promised to address it I would have accepted his apology.