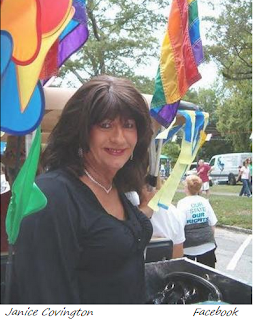 In a story broken by the Gorilla Angel Report Janice Covington the first transgender woman in history from North Carolina to be elected as a Delegate to the Democratic National Convention was told by the Mecklenburg Country Democratic Woman’s Association that they turned turned her down for membership.

She wasn't just rejected she was insulted to the core. The Mecklenburg Country Democratic Woman’s Association administrators said she belongs in the men’s auxiliary.

"ARE YOU READY FOR THIS?"


"I joined the Democratic Woman’s Association when asked to become a member during the Mecklenburg County Democratic Convention back in April of 2013. I filled out the application and then paid my membership fee. After a month or so I received a phone call from Mary Belk chair of the membership committee. During our conversation she said she remembered me and realized I was a Transgender Woman. We talked a little longer and she then said she accepted me as a member. I was then contacted about 3 weeks later to inform me of a meeting at the Asian Library in Charlotte NC on June the 12th 2013.

I arrived at the meeting early and was asked to help set up chairs for the meeting, I did this without hesitation. I then received my name tag and was checked off on the role when I checked in at the table near the entrance. After a great meeting, I was approached by a person who was on the board of directors of the Democratic Woman’s Association; she then informed me they had a problem with my membership. I asked what it was and she stated that I could not belong to the Woman’s association and that it would be better for me to be in the men’s auxiliary. I was insulted to greatest extent. I informed her that her request was not an option. She then informed me that the North Carolina State Democratic Woman’s Association would have to vote on me to allow me to remain a member. I feel that this is not acceptable and is in contrary to the policies of the Democratic Party’s mission statemen"

.
It just happened that when I reading the article by Courtney O'Donnell I had been on the phone receiving some ground breaking news from a life long friend in Dallas Texas, Pamela Curry, who told me she is exploring grassroots support for a run at the 2014 Texas Democratic primary for the 32nd Congressional District of Texas.

That's huge news in it self since as a transgender woman she could be running against the Chairman of the House Rules Committee Republican Pete Sessions .

Curry, who has served as election day judge and democratic precinct chairwoman for six years shed some light on Covington's predicament. Curry explained she was instrumental in the amending of the Texas Democrats  non discrimination policy in 2012 which now reads

.Curry explained that a states party's auxiliaries purpose is to help candidates get elected and with that being said it only follows that they adhere to their state's political party's rules.

The North Carolina 0.03 NON-DISCRIMINATION Rule is vague and could be interpreted as leaving wiggle room for bigotry:


No test for membership in, or any oath of loyalty to, the North Carolina Democratic Party shall be required or used which has the effect of requiring prospective or current members of the Democratic Party to acquiesce in, condone or support discrimination based on status.

The Democratic Women of Mecklenburg County just posted a response to The Gorilla Angel Report to their facebook page: 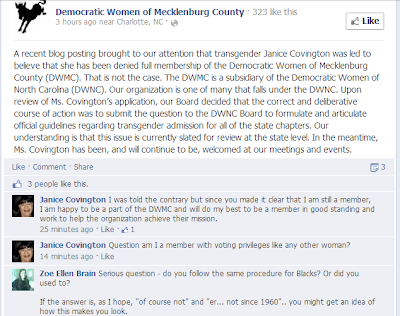 Janice Covington replied asking if she has voting rights which is valid question since men are allowed to be associate members but are not allowed to vote.

The North Democratic party's rules needs to be expanded to specifically include transgender people but that does not excuse how Ms. Covington is being treated. She isn't just any woman she is a transgender woman who deserves the respect she is being denied.