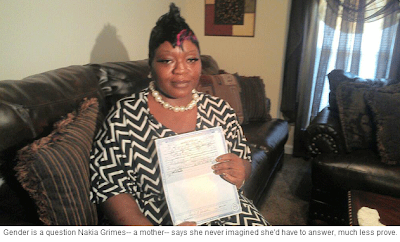 Filled under 'why can't we do this too?'

A presumably cisgender Georgia woman went to renew her driver licensee but due to a new law she had to return with her birth certificate. When she looked at it carefully she learned a mistake had been made when she was born, the wrong gender marker had been 'x'ed.

She left the human services office humiliated and mortified because they told her they wouldn't reissue her BC with her correct gender until she provided a physicians letter proving she was really a woman.

Sound familiar gender peeps? Well lucky for her she had Fox News champion of civil cisgender rights to ride in and correct this wrong.

Fox 5's "Kaitlyn Pratt took Grimes' concerns to Vital Records Services. Their director said what happened is not protocol, and she's looking into the incident. She also promised to make things right."

Georgia's laws are typical of our country's double standards and subjective enforcement. From Transequality.org:

In Georgia: "A person may have the gender designation on their driver’s license changed after a gender reassignment operation upon the presentation to a driver examiner of either a court order reflecting such change, or a physician's letter certifying such change. The letter or court order shall state the person's name and date of birth, and the date of gender reassignment operation, as well as other identifying information. A person applying under Section (1) shall surrender all licenses in their possession and shall be required to pay either the renewal license fee or a duplicate license fee, whichever is applicable. No rebate will be given for any licenses surrendered. In all cases the decision to change the gender designation on the license is at the discretion of the Department."

There are numerous online examples of problematic non enforcement such as the one the cisgender woman benefited from:


megafamilyproject.or "in the last few years the Georgia Department of Motor Vehicle Safety has issued a regulation that requires transpeople to show a notarized affidavit of genital surgery to have the sex marker changed on their driver’s license. This policy is enforced unevenly, however, and many times a person who presents with a certified copy of their order for name change and legal change of gender can get their sex marker change, depending on who is working the counter that particular day."

Although a little dated, the TS Road Map has some more examples.

In my state of Texas there are no laws about this. Changing ones name is easy enough but getting your gender marker changed on the all important drivers license is more about knowing which county to 'live' in and how to approach the clerk to get the right judge.

You can get the up to date information on your states policies here but keep this in mind, some judges are more liable to use good judgement than others so its critical to ask around and contact someone who has recently done a gender marker change for advice.