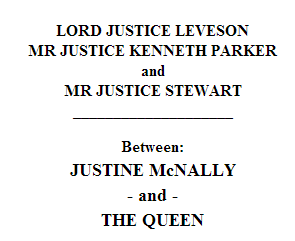 A very good breakdown of the case can be found at Complicity titled: Court of Appeal confirms: Stealth trans people having sex are criminals.

I'm uneducated about British law and American but to me there are a two points to examine. First this turns trans status into a liability.

Para 26 ".... where the complainant is deliberately deceived by a defendant into believing that the latter is a male.."

Paragraph 27: "deception as to gender can vitiate consent" making trans people guilty of deception simply for being trans. That finding is now case law in the UK potentiality criminalizing transsexuality and interex people who do not notify potential sexual partners (in writing?) prior to sexual contact.

Secondly, the case wasn't simply about being trans it was also about deception regardless of whether its about a trans of cis person. The issue is the vaginal penetration of a partner without her consent with a object other than what she expects I.E., a penis.

I'll probably get crucified for saying this but...supposing that both party's accurately described the circumstances prior to penetration I would have to agree the the ruling that aggrieved party was deceived. I am of the belief that disclosure of trans status with a potential sexual partner, before the sexual act occurs, is only right. Doing otherwise could be construed as deception. My opinion does not mean I think we as trans people are of less value, but we have undeniably different history in context with cisgender people and this history has a profound effect on whom we are today.

That being said, it us not right that all other other considerations, non disclouse of I.E. HIV status, age etc, to be considered OK, singling out trans status as the single criminalizing factor.