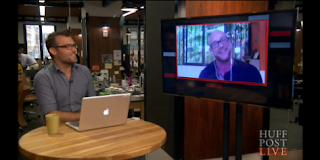 "They didn't like what I was doing, they thought it was disrespectful, they thought I showing the whole world we were all men with pussies. It was difficult in the beginning but I've changed that now. Everyone embraces my work."

Growing up Buck said about his transsexuality "I didn't see my future, it was very dismal for me" His mother waving her arms said "we didn't know! We didn't know what to do" while his father sobbed saying he 'wrote him out of his life.'

That rejection almost killed him "It was a bottle of pills, I took them all" Buck tells of his almost becoming another youth trans suicide statistic.

Out of curiosity I created a profile on Buck Angel Dating since this seemed to be of great pride to Mr. Angel. I was hopeful that this trans dating site might have more to offer since it was created by a member of our community.

But it appears the site is geared towards making money catering to those who want little more than a night of wild unabandoned uninhibited no strings attached kinky sex. But I could be wrong about that, like I said I created a profile for 'educational' purposes. Ya gotta pay Buck for the opportunity to hook up after creating your profile. Not what I'm into but I wouldn't 'buck' a friend if they did.