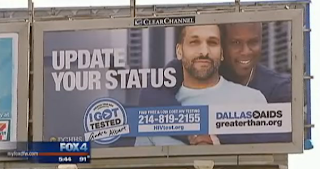 Dallas county has the highest rate of new HIV infections in Texas with 6,000 new infections reported every year and ranks among the highest nationally for teens contracting STDs due to the abstinence   based curriculum.

The Dallas Observer reports: But you can't plaster two gay dudes on a billboard in southern Dallas and expect it to fly with Dallas City Councilwoman Vonciel Jones Hill. She seems to fear the ad might have a corrupting influence on passersby. In an email to Fox 4's Shaun Rabb, she expressed concern that "African American men who engage in homosexual conduct [are] presented as acceptable" in the ad and that it amounts to an endorsement of homosexuality.