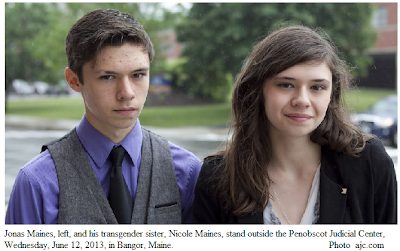 Nicole's dad talks about the inhuman treatment of his daughter that brought the case to where it is today:

"In the fifth grade when Nicole was ten years old another student made her life a living hell. He came into the bathroom one day and called her a 'faggot'. It Turns out this young mans grandfather was active in Maine's Christian civic league and he wanted to protest Maine's new law prohibiting discrimination based on sexual orientation and gender identity and expression."

'He told his grandson "if that boy can use the bathroom (girls room) so can you".

"Instead of enforcing Nicole's rights the school scared of being sued by the Christian civic league told Nicole she could no longer use the bathroom. That separation from Nicole's peer's made her feel like a freak."

Nicole's dad tells of what brought there family this point.

They discriminated by failing to allow her to use the proper restroom and failing to stop harassment.

How do you tell your to children it's adult that do not under stand you. How do you explain to your children adults are using you as political pawns? To make matters worst the boy began a two year campaign of harassment and intimidation calling Nichole hateful names, constantly following her around school, watching which bathroom she used and tormenting her.

Instead of stopping the bullying the school appointed staff to follow Nicole around punishing her instead of the bully.