NY Senate Refused To VOTE on GENDA! WHY?! 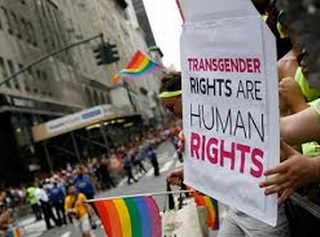 [email Empire State Pride Agenda]
Despite this, the Gender Expression Non-Discrimination Act (GENDA) made historic progress during the legislative session that just concluded. Virtually every major New York newspaper, including the New York Times, called for the Senate to pass the bill, which this year passed the Assembly for the sixth time with a nearly two-to-one bipartisan majority.
In addition, 78% of New Yorkers polled support ending discrimination against transgender people.
A sixth city, Syracuse, passed their GENDA law; a ninth county,Albany County, passed theirs, bringing the percentage of New Yorkers living in a jurisdiction that protects all of their citizens equally to 60.25%.

Law enforcement officials from around the state also voiced their support for enactment of GENDA as a strong tool for public safety, including this year for the first time Commissioner Ray Kelly of New York City. This broad and deep statewide coalition of law enforcement, labor, faith, civil rights, LGBT, progressive and women’s organizations stood shoulder-to-shoulder and called for GENDA. The community was united behind language that would offer strong protections, particularly in the areas of housing and employment.

We believe we had a bi-partisan majority of the Senate to pass the legislation and send it to the governor for his signature. We were defeated by the adamant refusal of the Senate leadership to bring the measure to the floor for an up-or-down vote.
What were they afraid of?

The Empire State Pride Agenda, on behalf of tens of thousands of transgender people and their families and others who wish to live their lives without fear or discrimination because of who they are, is angry and disappointed. Seventeen other states have already enacted a version of GENDA (including Delaware that passed a GENDA bill earlier this week). New Yorkers who are currently treated as second-class citizens by the laws of their home state deserve better. The LGBT community deserves better. Citizens of the United States deserve better. Frankly, New York State deserves better.

Every statewide elected official in New York has publicly expressed support for passage of GENDA, joined by 36 members of the New York City Council. More than three-quarters of voters support GENDA.

Today, the fight for GENDA continues. We are convinced that the passage of GENDA in New York State is inevitable. We invite all people and all parties who believe in freedom and equal opportunity to work with the Empire State Pride Agenda and its allies to ensure the swiftest possible passage of the Gender Expression Non-Discrimination Act.
Sign our pledge committing to keep fighting for the Gender Expression Non-Discrimination Act. Send a message to Albany that we won’t stop until we win.
In solidarity,
Empire State Pride Agenda
Nathan M. Schaefer
Executive Director

Email ThisBlogThis!Share to TwitterShare to FacebookShare to Pinterest
Labels: 2013 Genda